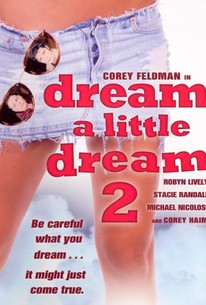 This direct-to-video sequel to the teen-oriented body-swap fantasy Dream a Little Dream (1989) - which, like its predecessor, stars Corey Feldman and Corey Haim as longtime buddies Bobby and Dinger - preserves the "fantastic reality" mood of the original but offers audiences a slightly different plot conceit (and omits co-stars Jason Robards, Jr. and Harry Dean Stanton). In the sophomore outing, the boys have graduated from high school and now share an apartment with a lady friend. They happen upon two pair of magical sunglasses, one of which enables the wearer to exert total control over the doings of the person who wears the other pair. Unfortunately, the shades were invented by a homicidal nut who soon notices their absence and sets out to reclaim his property.

There are no critic reviews yet for Dream a Little Dream 2. Keep checking Rotten Tomatoes for updates!

Sure it's got both Corey's again, and a somewhat similar situation as the first one, but it's more stupid and unfunny so, it's not really worth seeing.

An un-needed sequel to the quite lame original and this is even worse than that!! the first had some good cast members whilst this has none. The plot is just as weird and ridiculous with plenty of holes, acting is terrible from the young duo again and it makes no real sense. I can't believe so many were involved in making this haha