Dream for an Insomniac1996 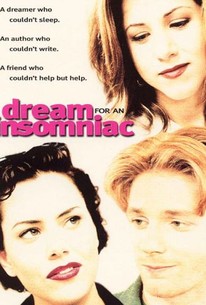 Dream for an Insomniac Photos

Set in San Francisco, this romantic comedy centers on the relationships between an aspiring actress and a blue-eyed handsome fellow who meets all her stringent requirements for being the "Perfect Boyfriend." Actress Frankie has spent much of her young-adult life living in an apartment of Uncle Leo's Café. She works there as a waitress along with Rob, her cousin. There they usually hang out with their friends, slacker Juice and fellow would-be star Allison. Before spying beautiful, blue-eyed David, Frankie refused to waste her time dating anyone "less than extraordinary." But the minute they meet, they begin exchanging literary quotes and from there it is love all the way, at least until Frankie learns that David has a girl friend. Adding further tension is Frankie's upcoming acting job, one that requires she move to LA.

Critic Reviews for Dream for an Insomniac

The chemistry between Skye and Astin is based entirely on grueling, non-stop referential dialogue, as if neither of them has forgotten a word of Kierkegaard, Tennyson, or Cobain.

It's talky, clumsy and a bit trivial, but the talk is rarely dull, and there's an integrity about its clumsiness: It's harder to be smooth when you have things you really want to say.

Dream for an Insomniac is really a self-conscious modern sitcom that with its San Francisco setting suggests a pale shadow of Armistead Maupin's Tales From the City.

Filmed in a mixture of black and white and colour, this has enough good lines to keep you smiling and the young cast members deliver attractive performances.

Aniston is the breeze in this movie.

A romantic comedy about bright, funny, confused young people in San Francisco, it fails to be bright or funny itself, only confused.

If you're looking for a safe romantic comedy featuring 20-somethings, then you might enjoy Dream for an Insomniac. If you like more challenging films, you won't regret skipping it.

All of the playful dialogue -- and this movie is joyfully full of talk -- is handled well in DeBartolo's savvy script and given life by actors who seem to truly embody the idealism of the characters.

Audience Reviews for Dream for an Insomniac

Dream for an Insomniac Quotes