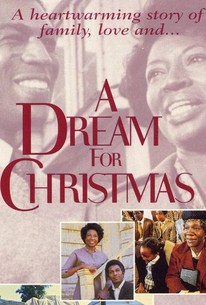 Created by Earl Hamner, A Dream for Christmas is set in the 1950s. African-American minister Will Douglas (Hari Rhodes) moves his family from Arkansas to the Watts section of Los Angeles to take charge of an impoverished church. The attendance, at least at first, is as poor as the congregation. Worse still, the church is slated to be demolished. But it's close to Christmas, a time when miracles have been known to happen. Featured in the all-black cast are Beah Richards, Lynn Hamilton, Robert Do'Qui, Juanita Moore, and Clarence Muse. Appropriately enough, A Dream for Christmas originally aired on December 24, 1973. It was originally designed as the pilot for a never-sold TV series titled The Douglas Family .

Hari Rhodes
as Will

Hari
as Rev. Will Douglas

Critic Reviews for Dream for Christmas

There are no critic reviews yet for Dream for Christmas. Keep checking Rotten Tomatoes for updates!

There are no featured reviews for Dream for Christmas at this time.