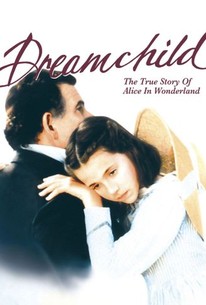 Irreverent British writer Dennis Potter speaks aloud what many literary historians have only postulated in whispers in Dreamchild. The film is set in 1932, on the 100th anniversary of the birth of Alice in Wonderland creator Lewis Carroll. The guest of honor at the New York-based celebration is 80-year-old Alice Liddell (Coral Browne), who as a child inspired Carroll's whimsical novels. Amidst the cajoling of both devoted fans and fast-buck hustlers, the grim-faced Alice tries to remain calm and dignified. What none of the idolaters suspect is that Alice harbors a long-suppressed secret concerning her "very special" relationship with Carroll -- a secret revealed in an extremely tasteful fashion during a flashback sequence, featuring Amelia Shankley as young Alice and Ian Holm as Charles Dodgson, the virginal, child-obsessed clergyman whom the world knew as Lewis Carroll. The darkness of Dennis Potter's vision is lightened by Muppeteer Jim Henson's marvelous three-dimensional renditions of the Wonderland and Looking Glass characters.

Frank Middlemass
as Caterpillar
View All

Dreamchild is an ambitious movie that tries to do a lot of things, and does most of them surprisingly well.

A marvelously inventive mix of fantasy and fanciful speculation.

The Jim Henson fabrications of the Wonderland characters are more horrific than whimsical and the direction feels like a TV film, but the attempt is noteworthy.

Wistful and warm ... and just a little bit dull.

Living up to it's title a dreamy film of the aged Alice's half memories of her childhood and Lewis Carroll interwoven with sequences of animated characters from the story and her present day, the 30's, trip to receive an honorary degree. Nice sense of time and place and a truly lovely performance by Coral Browne as the grownup Alice.

Quite good story behind the girl who was the inspiration for Alice in wonderland.