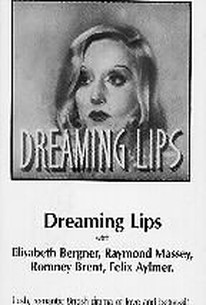 Dreaming Lips was lovingly assembled by filmmaker Paul Czinner as an "ideal" vehicle for his popular actress wife Elizabeth Bergner. The star plays Gabrielle, the glamorous, spoiled wife of world-famous orchestra leader Peter (Romney Brent). Left alone by her constantly touring husband, she inaugurates a romance with brilliant but reclusive violinist Miguel de Vaye (Raymond Massey). Booked for an American tour, De Vaye insists that Gabrielle accompany him -- and that she tell her husband about their affair. But when Peter falls seriously ill, Gabrielle dutifully remains by his side, never telling him of her indiscretion. Torn between two lovers, Gabrielle eventually decides to kill herself -- leaving a nonplused Peter to wonder just why his wife was so distraught. Overlength is the only significant flaw of this luxuriously produced three-hanky picture. ~ Hal Erickson, Rovi

Certainly it is the most impressive [Elisabeth] Bergner film recently made, perhaps her best film.

There are no featured reviews for Dreaming Lips at this time.