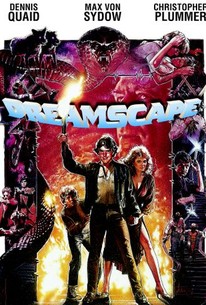 In an attempt to help people who experience recurring nightmares, a research program is using psychics to enter the patients' dreams. The studies are going well, until the President of the U.S. becomes one of the patients, and a psychic assassin attempts to kill him in his sleep.

Eddie Albert
as The President

Larry Cedar
as The Snakeman
View All

Film [from a screen story by David Loughery] centers on 'dreamlinking', the psychic projection of one person's consciousness into a sleeping person's subconscious, or his dreams. If that sounds far-fetched, it is.

This is as good a piece of solid, down-the-line schlock as anything to come along since Halloween III.

Most movies that try to crowd so much into an hour and a half end up looking like a shopping list, but Dreamscape works, maybe because it has a sense of humor.

Mostly maladroit, without the kind of high gloss or confidence that might help carry its audience along.

...too violent for kids, and too silly for adults...

A bold mix of horror, action, and comedy, and a very fun experience.

I really wanted Dreamscape to work and when I was younger, it probably worked better.

A perfect B movie for the 1980s: light and trashy, with political overtones and a blend of science fiction and paranoia, all calculated to provide fun for an audience disinclined to take matters seriously.

Tommy Ray Glatman: In this world, Alex, you're nothing. And me, I'm God.  "Close Your Eyes and The Adventure Begins" Dreamscape is an extremely silly movie, but it isn't without its merits. Featuring a story that is a cross of Nightmare on Elm Street and Inception, Dreamscape has some interesting ideas about nightmares and how we could build a story around them. The movie is actually a pretty fun ride, looking back. There were moments when I said to myself, "This is stupid", but in the end I liked it just enough. There's some interesting stuff that balances out all the bad things. Such as the performances from Plummer and von Sydow balancing out the performance of Quaid, who wasn't horrible, but had moments where he was. Dreamscape follows a man named Alex, who has endless psychic ability, but gave it all up at the age of nineteen. Now he only uses his abilities to pick winning horses. He soon finds himself back in action though, when he asked to help out in a new area, called Dreamscape. He goes into the dreams of people and can do pretty much anything. Soon he finds out that someone has a more sinister use for Dreamscape then he at first thought. Now it is up to him to bring an end to it. This is a movie that has that weird movie feel that can only come from the 80's. The effects are terrible when looked at today, and it made it kind of hard to watch, at times. Overall though, the effects were used in an almost humorous way, which actually made the movie more enjoyable. There were just a few instances where the effects seemed to overpower the interesting story that was taking place. Dreamscape isn't a movie that is overly thrilling or engaging, it is just a decent way to spend an hour and a half. I didn't fall in love with it, but it could have been exponentially worse. As it is, I would it give a mild recommendation. I personally wouldn't run out to see it again, but there's some stuff in Dreamscape that could appeal to other people on a grander scale, than it did me.

A great adventure filled sci-fi thriller all about dreams and psychics. I really liked this movie, and I highly recommend it.

Classic 80s sci fi . . amazing cast when one looks at it . . Quaid, Von Sydow, Albert, Plummer, Capshaw .. Crazy how many people they got on board for this one. Was a fun movie for sure.

"Dreamscape" is an overlooked little film from 1984. Surely it's a bit dated, but that's part of it's charm. The visual effects are brilliant in this capturing vivid dream sequences and various images from troubled individual's psyche which help this film hold up quite well. Dennis Quaid portrays a young psychic(Alex Gardner) who is coerced by his old friend and mentor Dr. Novotny(Max Von Sydow) into a research project that involves a new process known as "dreamlinking". Talented psychics such as Alex are able to hook up to troubled subject's dreams via electrodes in which they are not only able to view the dream, but are able to participate, and possibly effect a remedy. When the president of the United States comes into play as a troubled subject, things take a turn for for the worse as serious dreamscaping becomes called for. As a result, the process evolves into much more than ways to evade the "boogeyman".