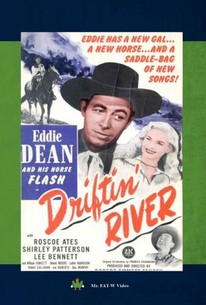 A virtual remake of the 1943 "Trail Blazers" western Wild Horse Stampede, this unspectacular but pleasant Eddie Dean oater once again featured a lawless town worrying about the coming of the railroad. Assigned by Army Major Hammond (Forrest Stanley) to inspect 500 heads of horses for sale by J. C. Morgan, Eddie and his sidekick Soapy (Roscoe Ates) learn that the seller is actually a pretty girl, Jenny Morgan (Shirley Patterson). Fearing that the coming of the railroad may bring law enforcement to the area, local saloon owner Merino (Dennis Moore) conspires with Morgan ranch hand Tucson Brown (Lee Bennett) to rustle J. C.'s herd and steal the payment from a nearby army detachment. Things get a bit confused when Eddie is mistaken for Whistling Sam, a notorious outlaw, but J. C. and foreman turned sheriff Tennessee (William Fawcett) believe in his innocence and when the dust has settled, the villains, including the real Whistling Sam (Lee Roberts), are safely behind bars. J. C.'s ranch is saved and the building of the railroad can continue without attacks from the area's lawless elements. Adding about 20 minutes of new footage, the always frugal PRC re-edited this film and re-released the entire two years later as The Tioga Kid. Leading lady Shirley Patterson's scenes were cut and the "new" film featured Jennifer Holt as pretty ranch owner Jenny Morgan.

There are no critic reviews yet for Driftin' River. Keep checking Rotten Tomatoes for updates!

There are no featured reviews for Driftin' River at this time.