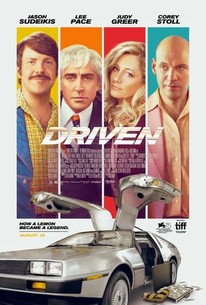 Set in early 1980s California, the story follows the meteoric rise of the golden boy of the automotive industry, John DeLorean (Lee Pace) and his iconic DeLorean Motor Company, through the eyes of his friendship with charming, ex-con pilot turned FBI informant, Jim Hoffman (Jason Sudeikis). DeLorean turned to unsavory activities to save his financially troubled DeLorean Motor Company, and it was Hoffman who was all too willing to lure the car designer/engineer into a cocaine trafficking ring set up by the FBI. Isabel Arraiza is Cristina DeLorean, DeLorean's fashion model wife, Judy Greer (Ant-Man, Jurassic World, War for the Planet of the Apes) is Ellen Hoffman, Hoffman's direct, no nonsense wife and Corey Stoll (First Man, Ant-Man, Midnight in Paris) is ambitious FBI Special Agent Benedict Tisa.

It won't have much cinematic impact...but I quite enjoyed it, even though it's spectacularly wiggy.

Sudeikis, alas, is no Cruise and his screen persona is too lightweight to inject the film with genuine empathy or to make it anything other than a disposable teaser for the deeper, darker DeLorean drama that will inevitably follow.

The film gives Pace a blank canvas on which to deploy more screen presence than everyone else combined, often just by directing a deep gaze in the general direction of the camera.

Hamm and writer Colin Bateman are far too soft on everyone involved, presenting the two "heroes" as misguided innocents ensnared in a web of street crime and FBI corruption.

Screenwriter and novelist Colin Bateman has here scripted a flashy but watchable true-crime thriller in the style of American Made (2017) or Blow (2001).

Nick Hamm's period biopic attempts to turn this tall-sounding tale into American Hustle on wheels: alas, the results have all the dramatic horsepower of a mobility scooter.

...Back to The Future fans, Ted Lasso admirers, petrol-heads and true-crime aficionados will find plenty here to draw them in...

An enjoyable and sharply scripted movie that benefits from the charisma of its central players.

An oddly specific story to make a movie about with somewhat odd choice of focuses, but it works

Driven skirts over the facts in order to offer audiences a light-hearted dramedy reminiscent of American Hustle (2013).

There's a really good story in there, but the makers chose to focus on all the wrong parts.

It all adds up to a fun and entertaining ride.

There are no featured reviews for Driven at this time.