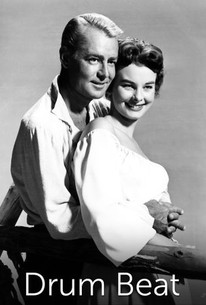 Though heavily advertised as Delmar Daves' Drum Beat, this film owed its existence to producer-star Alan Ladd. The star is cast as a veteran Indian fighter Johnny MacKay, who because of his close relationship with the Medoc tribe is sent out to negotiate a peace treaty. Once he has arrived in Medoc territory, Johnny (Ladd) must contend with the misspent emotions of his childhood sweetheart Toby (Marisa Pavan), the sister of Indian chief Manok (Anthony Caruso). Jealous over Johnny's relationship with pretty Nancy Meek (Audrey Dalton), Toby has cast her lot with renegade warrior Captain Jack (Charles Bronson), who honors no treaties. Though the film has a Native American villain, Drum Beat is largely sympathetic to the plight of the Indian. Based on a true story, the film is distinguished by J. Peverell Marley's breathtaking exterior photography, and by Victor Young's ballad-like musical score.

There are no featured audience reviews yet. Click the link below to see what others say about Drum Beat!