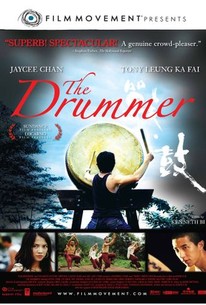 Sent away to rural Taiwan after entering into a forbidden affair with the daughter of his father's most dangerous rival, the musically gifted son of a powerful Triad boss experiences a newfound sense of balance in life upon entering into an apprenticeship with a Zen drumming troupe. Sid Kwan is a reckless musician who threatens to rock the entire underworld when he makes love to the beautiful Carmen. Carmen is the daughter of Stephen Ma, perhaps the most notorious Triad leader in the Hong Kong underworld. Should Carmen's father find out about the clandestine affair, the streets would likely be ablaze with gunfire, and Sid would certainly be the first to fall. Hoping that his son's life will be spared if he is out of sight, Sid's father sends the restless boy to lie low in rural Taiwan. Shortly after his arrival, Sid stumbles across a Zen drumming troupe who live and play together deep in the forest. Their passion and athleticism instantly mesmerizing to the entranced newcomer, Sid immediately asks if he might become a part of the unique community. While Sid's apprenticeship is at first straining, the clarity that he experiences after ingratiating himself to the community helps him make sense of the chaos that nearly consumed him back in Hong Kong and discover the peace that comes from owning up to his father's dark legacy.

There are no critic reviews yet for The Drummer (Jin. gwu). Keep checking Rotten Tomatoes for updates!

A really cool movie with some bizarre dark moments but overall great visually and kinda sweet.