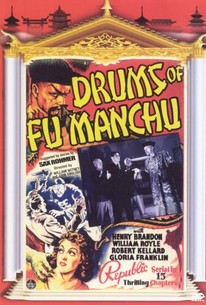 27-year-old Henry Brandon is surprisingly effective as the unspeakable title character in the 15-episode Republic serial Drums of Fu Manchu. The head of a sinister organization known as Si Fan, the insidious Fu hopes to fan the flames of war in Asia so that he can eventually take over the world. In order to accomplish his goal, he must get his slimy hands on the long-lost scepter of Genghis Khan, which will somehow authorize him to rule all mankind. His accomplices include his sexy daughter Fah Lo See (Gloria Fraklin) and the Dacoits, a race of bald-headed men who have been lobotomized into doing Fu's bidding without question. Fortunately for Civilization, Fu Manchu is thwarted at every turn by his diligent arch-enemy, Sir Dennis Nayland Smith (William Royle) of Scotland Yard. A feature-length abridgement of Drums of Fu Manchu was released by Republic in 1943.

There are no featured reviews for Drums of Fu Manchu at this time.