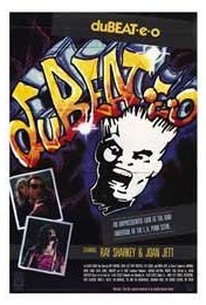 In this tale of the New York City underground art scene, an obnoxious film director (Ray Sharkey) in debt to gangsters holes up in a studio to finish work on a film starring rocker Joan Jett. In between screaming at and intimidating his film editor (Derf Scratch) and having sex with a naive young blonde (Nora Gaye), he worries that if the film isn't finished on time, the mobsters will kill him -- which they will.

Joan Jett
as Herself

Len Lesser
as Hendricks
View All

There are no critic reviews yet for Du-beat-e-o (We're All Crazy Now). Keep checking Rotten Tomatoes for updates!

There are no featured reviews for Du-beat-e-o (We're All Crazy Now) at this time.