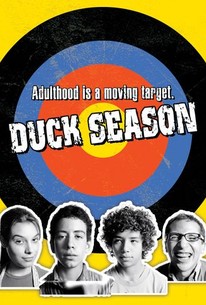 Critics Consensus: This modest cinematic slice-of-life manages to subtly capture many small but resonant and truthful moments of adolescence.

Critics Consensus: This modest cinematic slice-of-life manages to subtly capture many small but resonant and truthful moments of adolescence.

Critic Consensus: This modest cinematic slice-of-life manages to subtly capture many small but resonant and truthful moments of adolescence.

A typical lazy Sunday gives way to an introspective look at what it means to grow up for two 14-year-old boys left alone for the afternoon in director Fernando Eimbcke's gentle coming-of-age comedy. With the parents away and the Xbox all to themselves, best friends Flama (Daniel Miranda) and Moko (Diego Cataño) plant themselves in front of the television and prepare for a fun afternoon of junk food, soda pop, and video games. As the battle to the death rages on the television, Flama's 16-year-old neighbor Rita (Danny Perea) knocks on the door to ask if she can use Flama's oven to bake a cake. When disaster strikes in the form of a deathmatch-killing power outage, Flama and Moko hang up the video-game controllers and call the local pizza parlor in hopes that the delivery man won't make the 30-minute guarantee and they will get a free pie. With a stopwatch in hand and the clock ticking, hapless delivery driver Ulises (Enrique Arreola) arrives precisely 11 seconds late. As the power flickers back on and the stubborn boys insist that their pizza should be free, Ulises contests their claim before agreeing to battle Moko in a video soccer match that will determine once and for all if the boys will pay for their pizza. Their game foiled by yet another unexpected blackout, the bored teens begin contemplating the strange behavior of adults, and the role that a painting of ducks plays in the bitter divorce of Moko's parents.

Sara Castro
as Lady
View All

A nuanced, authentic portrait of adolescent ennui and maturation that treats pre-teen emotions with a Jim Jarmusch-ian brand of detached sympathy and bemusement.

The fullness of Duck Season is in direct proportion to its smallness; its modesty makes it bloom.

Effortlessly nonchalant in its observations of kids and the way the world looks to them.

Imagine Waiting for Godot performed by The Breakfast Club.

Devotes itself to youthful inertia.

Eimbcke pieces together scenes with Rita and the young boys that are sweet, sensitive, a touch flirty, and sometimes innocently awkward.

This little gem of a movie, about finding your passion when the lights go out, will leave you with memories of life's tiny, sweet moments...

This Mexican coming of age tale shows itself to be a tender and quirky take on the genre.

The modest film works best for the viewer who goes with its flow of inertia.

Duck Season is definitely worth seeing, but mostly it is worth seeing past, into the future of a promising new filmmaker.

What to do in a monotonous sunday? Sundays are always boring, anyway. But if the lights go off and you can´t play videogame anymore? You deliver a pizza, of course, but why not making a cake maybe? Duck Season shows in a very simple but effective way the banality and not always obvious complexity of a generation growing up in a society of trash food and trash culture. Nothing really happens at the same time that everything does: discovery of sexuality, first kiss, divorce, parent´s absence, loneliness. The pizza delivery man represents, perhaps, the future: as it´s possible to survive to a sunday, maybe it´s not possible to avoid the inevitable frustration...

After all those great things I'd heard about this my expectations were high but..., Not a bad film but tries so hard to be simple that almost loses it, I hope Matando Cabos will be better

this super funny 2004 movie, produced by Alfonso Cuarón and directed by Fernando Eimbcke went under the radar a little bit, but it definitely is one of the best mexican films of the decade... everything in this movie revolves around boredom, but the result is anything but boring... flama and moko, two 14 year old boys have everything planned out for a great weekend without parents, but this plans are quickly ruined by a power outage, so they have to find out something to do... it's nicely shot, it has great writing and a really good cast, especially Diego Cataño (Moko), Danny Perea (the baking neighbor) and Enrique Arreola (pizza delivery guy)... great mexican film!