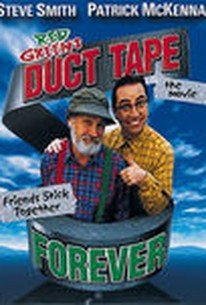 In order to pay off the steep fine accrued after a businessman has sued the Possum Lounge, Red Green's (Steve Smith) cousin Harold (Patrick McKenna) suggests that the lodge members join in the Duct Tape Contest being held in Minneapolis, MN. Though the goal is intimidating -- they have to create an object comprised of at least 80 percent duct tape -- the 10,000-dollar purse for winning third place is the exact amount needed to pay off their newfound debt. It looks like a duck made entirely out of duct tape is their ticket to the bronze, but the men find themselves facing a variety of unexpected obstacles on their way to the city. Not only are Red and Harold going through a rough patch in their friendship, but the smarmy businessman has paid off local authorities to make sure that the lodge members would be unable to pay the fine. ~ Tracie Cooper, Rovi

The series' good-natured, self-deprecating extended joke about male regression, handyman incompetence and Canadian humility are here in big-screen proportions, and it all works very well.

Smith forgot to include any of the subtle, language-based comedy that marked his career as an author and stand-up comedian, so that all we're left with are obvious sight gags and laborious moments of slapstick carnage.

A pretty solid movie ... one that should amuse casual admirers (present company included) while delighting the rabid fan.

Not much of a movie.

The saddest thing about Duct Tape Forever is the fact that it's a sign of the direction commercial Canadian cinema is going: cheap comedies with name-brand appeal.

The movie offers more corniness than laughs, delivered with a visual-drabness that fails to justify its packaging as a theatrical film.

'Duct Tape Forever' has humor that kind of sticks to you.

It's essentially a Red Green Show episode stretched to a 90-minute movie, but with about the same number of laughs.

Not even a roll of duct tape can patch up the problems.

Charming movie, as only the Canadians can do. Based on the "Red Green" television show. I like Steve Smith's character. It's dorky but got a lot of heart. They should've had a love interest for Red Green in this movie.