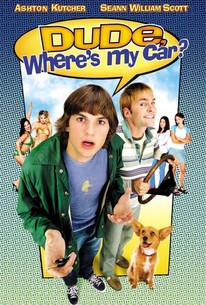 Critics Consensus: The movie isn't funny, the plot is too thin, and the production values feel more like a TV sitcom than a movie.

Critics Consensus: The movie isn't funny, the plot is too thin, and the production values feel more like a TV sitcom than a movie.

Critic Consensus: The movie isn't funny, the plot is too thin, and the production values feel more like a TV sitcom than a movie.

The startling effects of chemically induced short-term memory loss provide the backdrop for this resinous teen comedy. Jesse (Ashton Kutcher) and Chester (Seann William Scott) are two hard-partying dudes who wake up after a very long night on the town to discover they've forgotten the presents they bought for their girlfriends Wanda (Jennifer Garner) and Wilma (Marla Sokoloff), twins who are more than a bit miffed that the stoners they've come to tolerate appear to have forgotten their anniversary. The presents are in Jesse's car, but they're so fuzzy on the details of the previous 24 hours that they have no idea where they left said automobile. Jesse and Chester set out to find their wheels, and along the way they discover that they had an even more eventful evening than they imagined, as strippers, aliens, a suitcase full of money, and a kitchen full of pudding become important pieces in the puzzle of the missing car. Dude, Where's My Car? also stars Hal Sparks, Kristy Swanson, Kevin Christy, and Fabio; it was written by Philip Stark, previously a writer for the TV series That 70's Show, which also features Kutcher in its cast. ~ Mark Deming, Rovi

Christian Middelthon
as Nordic Dude No. 1

Christian Middlelthon
as Nordic Dude No. 1

Katherine A. Baker
as Stripper No. 1

Mitzi Martin
as Jumpsuit Chick No. 1

Linda Kim
as Jumpsuit Chick No. 3

Mia Trudeau
as Jumpsuit Chick No. 4

Melissa Messmer
as Dancer No. 1

Misty Atkinson
as Dancer No. 2

Veronica Gomez
as Dancer No. 3

Melissa Burleson
as Dancer No. 4

Annette Pursley
as Dancer No. 5

Melissa Copen
as Dancer No. 6

Linda Maria Balver
as Dancer No. 7

Cheryl Tsai
as Dancer No. 8

David Herman
as Nelson
View All

Leiner's lame-brained travesty shoots for wacky but instead ends up being intensely irritating.

The definition of aiming low is when the John Hughes film you're ripping off is Weird Science.

Operates in a limbo between the relentlessly moronic and the legitimately entertaining, while almost solving the vehicular existentialism suggested by its title.

One wonders if the film would not have been better if it had concentrated on the night before, instead of telling this far more interesting story in mere flashback.

It would be better if if Philip Stark's flibbertygibbety disconnected structure was linking better jokes.

A jaw-dropping intergalactic caper 'comedy' where no less than the fate of the entire universe is at stake.

...a stoner mystery that recycles tried and occasionally true gags specifically packaged for today's teenage audiences, like the cheerleading squad I was sitting next to.

"Dude Where's My Car" suffers from an overdone plot, dumb characters, and a preposterous plot line. Every critic is saying that is is too stupid to be taken seriously, and I have to agree with that, but in reality it does not need to be taken seriously. It is one of the stupidest, dumbest and most provocative comedies I've ever seen, but I just have a blast watching it! It is definitely not good film by any means, but by the end of the day, you will always remember how stupid Sean William Scott and Ashton Kutcher were! "Dude, Where's My Car" is a huge guilty pleasure.

Dude, Where's My Car? is a fun, dimwitted comedy about two hards partying stoners who've like the title of this movie implies have lost their car. The film is flawed yes, but it manages to be fun and wacky at the same time. This is the type of comedy you have to shut off your brain to enjoy, it really is the only way to. The gags on screen are bearable and the story is ridiculous but fun. I would say that this is one of my many guilty pleasures. The story is paper thin, and the acting isn't great, but to me, theres a certain appeal that I like about this film. The film is fun if you're in the mood for something totally stupid. If you don't like this type of humour, then Dude where's my car? is not the film for you. The film does manage to make you laugh, but it's never anything too hysterical. The funniest bit of the film were the chicks looking for the Contiuum Transfunctioner. I thought that was absolutely wacked and very funny. Kutcher and Sean William Scott are likeable, nothing too great. But I thought they managed something pretty decent. Dude Where's My Car? was never meant to be a comedy classic. I view it as an average enjoyable comedy with decent laughs. The film is fun, if you're in the right state of mind for this type of humour. Dude Where's My Car? is harmlesss fun simple as that.