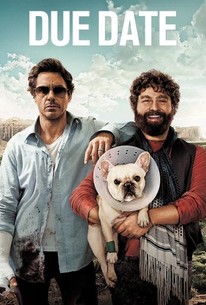 Critics Consensus: Shamelessly derivative and only sporadically funny, Due Date doesn't live up to the possibilities suggested by its talented director and marvelously mismatched stars.

Critics Consensus: Shamelessly derivative and only sporadically funny, Due Date doesn't live up to the possibilities suggested by its talented director and marvelously mismatched stars.

Critic Consensus: Shamelessly derivative and only sporadically funny, Due Date doesn't live up to the possibilities suggested by its talented director and marvelously mismatched stars.

Director Todd Phillips re-teams with his break-out Hangover star Zach Galifianakis for this road movie concerning a soon-to-be father (played by Robert Downey Jr.) and his cross-country trip to make it back in time for his baby's birth -- with the only roadblock being the dubious passenger (Galifianakis) who's along for the ride. Michelle Monaghan and Jamie Foxx co-star in the Warner Bros./Legendary Pictures production. ~ Jeremy Wheeler, Rovi

News & Interviews for Due Date

View All Due Date News

Critic Reviews for Due Date

Oscar-nominated actor Robert Downey Jr. usually has a knack for picking good movies. But Due Date is not one of them.

Downey is not entirely comfortable playing straight man and a little of Galifianakis's antics goes a long way.

It's a tough double act, but the film pulls it off with great confidence and some major laughs.

[Phillips'] talent lies in the comedy of embarrassment and while this isn't quite up to the standards of The Hangover, it's not a bad example.

These guys can't buy a laugh.

The hangover from The Hangover...

The dialogue is essentially the most original and entertaining aspect of the adventure.

Downey feels like he's digging out from the bottom of a well and never quite able to reach the surface of Peter's humanity.

There are a few laugh-out-loud lines, but the situations prompt more curiosity about what will happen and/or how they'll get out of it than actual amusement.

A fairly unoriginal movie which exasperates any opportunities for comedy, with the end results being run of the mill and slightly contrived.

Audience Reviews for Due Date

Due Date has a good deal of funny moments and works thanks to the talent of its two stars, especially Galifianakis, who is really obnoxious at first but soon gains our sympathy.

Zach Galifianakis' giant, slobbering puppy routine just makes you want to smack his nose with a 2x4, but then he throws out this really moving crying scene that seems charged by the depths of his soul. That's basically the dynamic between the humorless, responsible, soon-to-be-dad and the infuriating, good-hearted, actor-wannabe in "Due Date," and it works. RDJ plays a great, blasé straight man, and the budding father/overgrown-son relationship is filled with triumphs and laughs. But alas, Michelle Monaghan is, once again, a mere supportive woman.

This is pretty much Planes, Trains, and Automobiles for a new generation, except this film is quite as funny or well-made. It's not a remake of that film, so much as it is a take on that film's general concept. With this one though, just swap out Thanksgiving for the birth of a child, and take away the trains (well, there are cameos, but that doesn't quite count). Downey Jr is the straight man, Galifianakis is the obnoxious (big emphasis there) but well meaning (we hope) comic relief, and joining them are a number of nice little cameos, with one of the best being from Juliette Lewis, although Foxx is not bad. I like Michelle Monaghan, but could have used more of her. I feel that way about her career in general, though. There are some laughs, but I never found this film to really be hilarious. There are some serious, dramatic, and even legitimately touching moments, but overall, tonally this film is inconsistent. PTA was a little mean spirited besides heart warming and hilarious, but it also felt more convincing, and the changes in tone and character were earned. This film doesn't quite get there. It sure tries though. I think the main thing is that this film had a lot of potential, but, to tie in with the film's plot, it's a bit premature. The script could have been retooled and some of the story elements could have been reworked to get the audience to care just a tad more, and have it stick. I did like the performances though, because those were decent, although Galifianakis did get on my nerves, which doesn't really ever happen. Maybe I'm just tiring of his shtick. Some of the film's big moments are cool ,but some are maybe just a little too over the top or ludicrous. All in all, I can't bring myself to give this a mild recommendation, even though I didn't find the viewing experience of it to be unenjoyable. I actually do sort of recommend it though, like mostly if it's on cable or something. Otherwise, it's not really a film that must be seen.