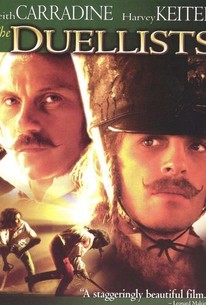 The Duellists is based on a story by Joseph Conrad, variously titled The Duel and The Point of Honour. Keith Carradine and Harvey Keitel play officers in Napoleon's army -- D'Hubert and Feraud, respectively -- who spend their off-hours challenging each other to bloody duels. This goes on for nearly 16 years, with neither man showing any inclination of calling a truce. The final clash finds the gentlemanly D'Hubert getting the upper hand of the obsessed Feraud -- but that's not quite the end of the story. The Duellists was the debut feature for director Ridley Scott; it won the Cannes Film Festival prize for Best First Film. ~ Hal Erickson, Rovi

News & Interviews for The Duellists

View All The Duellists News

Critic Reviews for The Duellists

The richness of Scott's visuals, the excellence of the performances and the depth of the themes combine to make a minor masterpiece.

Scott gets strong performances from his supporting cast (Quick is sensual and effective) and is able to salvage the movie through the alchemy of the striking visuals.

Keitel is jaunty and menancing and Carradine more determined and a bit troubled but also caught up in this strange need of one to prove honor and the other slaking a twisted nature.

Keitel struggles gamely against a wooden Carradine, but the American influences further dislocate a script that delivers little observation, psychological or social, on their running feud.

It is precise, intelligent, civilized, and because it never for a moment mistakes its narrative purpose.

The film comes closer to working than it has any right to, given the curious casting (Keith Carradine and Harvey Keitel) and director Ridley Scott's inability to sustain dramatic tension or build a coherent scene.

It's an ambitious undertaking for first-time director Ridley Scott, whose burgeoning filmmaking styles are evident even in this early effort.

What is most surprising about this incredible movie is the exceptional beauty of its images. [Full Review in Spanish]

Interiors are bathed in the golden light of candlelight and nostalgia, like a period painting in motion, while exteriors are wrapped in fog and mist. It's a production triumph in service of a quietly compelling drama ...

The accounts of the wars lack passion and left me more disinterested in this brilliant story than I should have been.

... one of the most strikingly pictorial movies ever made.

Scott's approach to his material seems essentially a stylistic one; it imposes itself upon the story rather than visa-versa, giving an account of the Napoleonic wars that lacks passion and depth, despite the expert visuals.

Audience Reviews for The Duellists

At the beginning I was growing a little bored with this film, a lot of talk and nothing much interesting at that. Slowly you do get a sense of the two main characters and who they are, what they want, and there is the plot. Two soldiers at each others throats through the Napoleonic era from a simple silly cross of words. It sounds almost stupid but the story shows great human emotion as you follow Carradine's character, watching him grow weary and tired of the feud. Whilst at the same time Keitel is perfect as the egotistical and virtually combat obsessed Feraud who loves a good duel. Feraud's quick temper and short fuse causing the main quibble and many others throughout the story. As time passes we see both characters change and grow in terms of attitudes and maturity as well as looks and styles throughout the age. This is where we see Ridley Scott's attention to detail and his master of visual art. The film looks stunning all the way through from start to finish, the costumes are lavish and accurate right down to the buttons on the men's tunic's (certainly looks that way anyway). The sets are small but look highly authentic whilst the landscapes of Europe are sensational! How Scott got the shots as he wanted is beyond me because it looks as though he made a deal with God for some, he must have waited some time for just the right weather to arrive. Whats more amazing is this was all achieved with no CGI assistance of course. Its all very real which makes it even more impressive and shows just what you can do if you put in some hard graft and really really care about what your doing without simply relying on the lazy digital way out. You would never guess this was made 34 years ago now, the stunning visuals and story play out just as well as any modern historical epic. The sword fights may be few and far between but look perfectly realistic, it really does look as though the men are really having to think about their next move, what they're gonna do next to try and survive. No fancy over the top movements, stunts or showboating for the camera here, its all very strategic looking. I loved the way D'Hubert pauses just before the start of one duel to simply sneeze. Intended? I don't know but its a nice little touch that just makes the moment that little bit more realistic...and aristocratic. Seeing as this was Ridley Scott's first film its a hell of start and really shows his potential. The only thing I would say is the film makes you wanna see more of the history going on around the main characters, alas you don't really see much. Its tantalising and hints at it making you want more but the story feels a tad restricted at times. Watching these two chaps bicker like children over nothing in a very polite way can get a tiny bit stale, but overall you still can't help but adore what you're seeing.

Ridley Scott's The Duellists is an impressive period piece and a stunning first full length feature of a director who would carve himself a unique style and become one of the best directors in cinema. The film shows the early stages of what would make Ridley Scott a stunning director. The Duellists is a compelling picture that mixes drama and action in the Napoleonic era. The cast do a fine in their performances and Keith Carradine and Harvey Keitel are wonderful to watch on-screen. I really love period dramas as they reflect the most interesting aspects of history. The film looks great, is well acted and the plot is sure to appeal to cinema buffs that enjoy history based movies. The look of the film was heavily influenced by Stanley Kubrick's Barry Lyndon, and the result is a movie that looks absolutely wonderful. The sets and costumes are authentic to the time period and the result is a film that definitely belongs on the list of the best looking and best told historical dramas. Ridley Scott's direction is wonderful as well, and the film has effective pacing that you involved in the action and drama and above all, the well layered story. If you enjoy Ridley Scott's body of work, give his debut a look, it is well worth watching due to its cast, story and look. The film's obvious strong points are the sword fights, which make up the core of the story. This is a highly engaging film that is among the very best of period pieces. The Duellists is only rivaled by Kubrick's Barry Lyndon, also worth seeing. Both are fine pieces of cinema, but this one has a bit more action, which may appeal more viewers that enjoy a better paced movie rather than a massive epic.

it's wonderfully photographed but the story is a bit lacking and the american actors aren't helping with suspension of disbelief. i love harvey keitel but he just can't do everything

An absolutely gorgeous film with a nice evocative storyline. The pace of the film, however, seems to be sorely lacking, but I don't think it's the editor's or even Ridely's fault. The story deemed that it be told slowly. I really enjoyed seeing what Ridley got to do with his first feature. An extraordinary film.