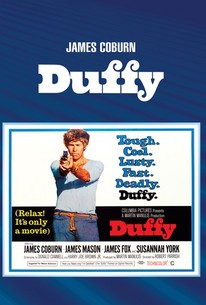 Duffy (James Coburn) is an aging hippie approached by two sons of a prominent banker. The boys have two different mothers but share the same father -- J.C. Calvert (James Mason). The sons hate their father and recruit Duffy to help them abscond with millions from his bank. They steal money from a ship before blowing up the vessel to cover up their crime. Rescued by a helicopter pilot, the thieves stuff the money into the pockets of the dead bodies in the aircraft. When Duffy discovers the caper was planned by Calvert all along, he blackmails the banker to keep his knowledge about his insurance fraud scheme silent. Lou Rawls sing the title tune in this blatant and lethargic cinematic attempt to cash in on the hippie movement.

Duffy is a movie mostly made up of pauses. Unhappily, Parrish does not understand the pause, and so what we mostly get are dead spaces with James Coburn smiling enigmatically.

There are no featured reviews for Duffy at this time.