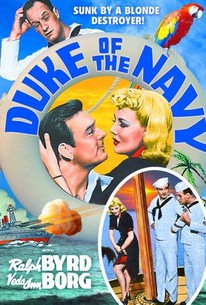 Ralph Byrd, known far and wide for his movie interpretation of Dick Tracy, trades his civvies for Navy blues in PRC's Duke of the Navy. On furlough with his pal Cookie (played by swimming champion Stubby Kruger), Breezy Duke (Byrd) is mistaken for millionaire candy manufactuer John T. Duke. While in this guise, Breezy is inveigled into joining a treasure hunt-provided, of course, he puts up a great deal of money for an entry fee. Amazingly, Breezy and Cookie manage to unearth a genuine treasure, namely a fortune in diamonds. Director William Beaudine was one of the three credited screenwriters of Duke of the Navy, which was certainly haphazard enough to have been written by a committee.

Zack Williams
as `Congo'
View All

Critic Reviews for Duke of the Navy

There are no critic reviews yet for Duke of the Navy. Keep checking Rotten Tomatoes for updates!

There are no featured reviews for Duke of the Navy at this time.

Duke of the Navy Quotes