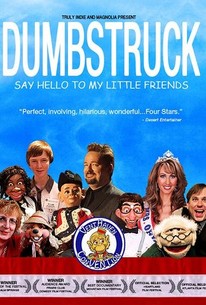 Critics Consensus: Dumbstruck stands as the definitive -- and, not coincidentally, the only -- documentary about ventriloquists.

Critics Consensus: Dumbstruck stands as the definitive -- and, not coincidentally, the only -- documentary about ventriloquists.

Critic Consensus: Dumbstruck stands as the definitive -- and, not coincidentally, the only -- documentary about ventriloquists.

If mom or dad ask what you want to be when you grow up, and you answer, 'a ventriloquist,' chances are they will a) question your sanity, b) have you locked up, c) be thrilled because they've just seen the delightful new documentary, DUMBSTRUCK. The journey begins at the annual Vent Haven convention in Ft. Mitchell, Kentucky, ventriloquism capitol of the world (now you know where to take your next vacation). The film focuses on five 'vents', who are quirky enough to star in Christopher Guest's BEST IN SHOW. But they are real, and their stories are deeply human and universal: Dylan, a shy 13-year-old who dreams of being a professional but whose dad prefers football; Kim, a former Miss Ohio beauty queen, who yearns to 'make it' on the cruise ship circuit; Dan, a successful cruise ship performer whose wife may divorce him when he comes ashore; Terry, who, after 22 years of struggle in Corsicana, Texas, finds himself on NBC's America's Got Talent with a chance to win $1 million; and Wilma -- all six-foot-five of her -- who brings her dummies to Walmart and 'entertains' in senior homes. With its heart firmly planted on its polyester sleeve, Dumbstruck takes the American dream sideways and never loses its way. The film traverses the country from coast to coast, cruising the Mexican Riviera, Bahamas and Japan. We share in their successes and missteps, both on- and off-stage, as they strive in their own ways to achieve the American dream. The film is filled with music, laughter and a roller coaster of emotions, riding through the world of ventriloquism. --(c) Official Site

Critics Consensus: Water for Elephants Is A Little Soapy

Dumbstruck actually pays more convincing tribute to those willing to honor their interior calling regardless of the hardship.

The world of ventriloquists is a fascinating one (especially if you, too, once had your own mail-order Mortimer Snerd dummy). And it comes to real life in the gentle documentary "Dumbstruck."

"Dumbstruck" is a documentary tailor-made for dummies and those who love them dearly.

What a bunch of dummies.

An earnest but undeniably eye-rolling documentary about the denizens of this odd pocket of show business.

The kind of heart and humor-centered documentary that audiences will love and indie film fans will deeply appreciate.

While the filmmakers do a good job showcasing their subjects' talents, I found the movie a bit lacking in exploring their personal lives and motivations.

I imagine there is an audience that's dying to find out where the next great ventriloquist is coming from, but "Dumbstruck" does not have much appeal for folks who aren't already fascinated by this topic.

Doesn't plumb much below the surface of the subject, but remains an interesting curiosity.

"Dumbstruck" will give you an appreciation in the effort and talent needed to be a ventriloquist.

Instead of shooting for real insight, the smoothly-edited doc maintains a pleasant course, as troubled artists continually navigate between compromise and concession.

Another wedge of American culture is tilled in this documentary, which starts at the VentHaven Convention of Ft. Mitchell, Kentucky, an annual meeting place for the film's five subjects. The film certainly hinges on their individual stories, each aptly tragic. At the crux is 2007 winner of America's Got Talent Terry Fator, who quickly rises from obscurity to become one of Forbes top ten best paid comedians. His talent and specific skill for singing hauntingly beautiful odes to Etta James, Louis Armstrong, and Guns n' Roses makes him the most interesting and watchable of the motley crew. We're also given introspective looks into lesser known ventriloquists such as cruise ship hopper Dan Horn, obviously the best manipulator in the business, with realistic facial expressions and mannerisms. The quirkiest is former Miss. Ohio pageant winner Kim Yeager, who is not as talented as her counterparts, always trying to get a job on the lucrative cruise ship circuit, or leave it all behind and finally settle down in Cincinnati. Quick flashes of a thirteen year old boy with a black dummy, which doesn't fit in any discernible way, and a woman who resembles a bird and speaks like a lost alien being are thrown in as filler throughout. Nothing is truly revealed or discovered about the art of ventriloquism, though they sometimes say encouraging things to one another about their skills. We do see inside the dummies, the vast props and things they must buy to accommodate them, and the affects of a life that revolves around playing with dolls. Yes, the characters all have their own obstacles to overcome, but none of their emotions are mined. We never see the depth of the father-son relationship concerning the thirteen year old and his masculine inclined father, or the desperation behind the fading beauty queen's lackluster act. It's not boring, but it could have been much better and culturally informative.