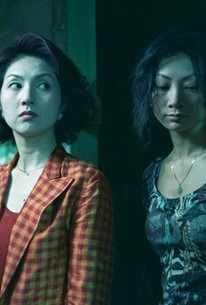 A former soap opera actress decides to eat a Mainland woman's special dumplings in her quest to obtain eternal youth. Trashy Mainland immigrant Mei is a former singer-turned-doctor-turned-abortionist whose patented dumplings provide a lifeline for Qing, a retired actress whose marriage to businessman Li has sexually stalled. What's now clear is that Li himself, who eats eggs containing chicken fetuses, is equally obsessed with maintaining his sexual allure. This leads him to also seek out Mei's services, with surprising results.

The strong horror element of this fascinating film is added by the detached narrative stance, supported by the sumptuous colors of Chris Doyle's photography. Eat before you watch.

Fruit Chan crafts a queasy, unsettling film about vanity and obsession using an exemplary sound design to evoke tension from a really unusual premise. Still, it has problems in the editing, while the parts don't seem to add up to an exactly satisfying whole.

"Dumplings" tells the tale of a former doctor, who operates a dumpling shop from her home with a secret youth creating ingredient. A former actress, past her prime seeks out this special food created by Aunt Mei in order to attract her adulterous husband's attention. Fruit Chan makes no attempt to imply or hide the secret ingredient from the audience, but rather lays out the premise from the beginning, while increasing the graphic details throughout the film. This film explores some disturbingly probable themes, especially how far people will go to reclaim their youth, and the emphasis society places on looking young. He manages to explore the repercussions of this quest for youth, while still leaving some details up to the interpretation of the viewer. The film is exquisitely shot, with some amazing angles and close-ups surrounded by beautiful cinematography, and set design. He manages to bring the viewer into the world of the characters making the theme all the more real and disturbing. Fruit Chan accomplishes this realism by juxtaposing Aunt Mei's blunt and complacent attitude with Mrs. Li's deterioration into desperation. Definitely not for the squeamish, or easily disturbed. To some this topic will be upsetting. However, for those who like something a little different, or fans of such directors as takashi miike or chan wook park, you will love it. I enjoyed it thoroughly. 3 1/2 Stars 2-19-14

YES! A Bathory of 21 Century. Japanese Movies like these are very grusome, even the Low Budgets ones needs strong nerves to watch. Not excactly creepy, it is sick and disturbing.