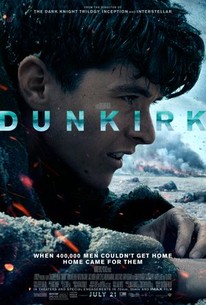 Critics Consensus: Dunkirk serves up emotionally satisfying spectacle, delivered by a writer-director in full command of his craft and brought to life by a gifted ensemble cast that honors the fact-based story.

Critics Consensus: Dunkirk serves up emotionally satisfying spectacle, delivered by a writer-director in full command of his craft and brought to life by a gifted ensemble cast that honors the fact-based story.

Critic Consensus: Dunkirk serves up emotionally satisfying spectacle, delivered by a writer-director in full command of his craft and brought to life by a gifted ensemble cast that honors the fact-based story.

Tom Hardy
as Farrier
View All

The visuals, the structure, the use of sound and music, and the simple presence of a beating heart - all come together in a whole that is truly breathtaking.

Dunkirk shows off Nolan's own techniques as a filmmaker to make for a film that is technically, if not completely narratively, lustrous.

The strange problem posed by the movie is, in terms of what it sets out to do, completely of a piece but missing the surge of feeling that would make that thing worth doing.

[Dunkirk] is absolutely riveting, but not quite the high-minded salute to the Greatest Generation the marketing may have you believe.

When Dunkirk ended, I realized it wasn't Dunkirk I wanted to watch: It was the sequel.

A film that vindicates the struggle of the anonymous heroes, solidarity, and highlights the importance of not giving up in the most adverse moments, where everything seems to be lost. A very necessary message for the times we live [Full review in Spanish]

Nolan's strength here is his ability to place audiences right into the thick of the various struggles taking place by air, land and sea.

One of the best films of the decade... leaves no doubt about Nolan's genius and his position within the pantheon of legendary directors. [Full review in Spanish]

Previous Christopher Nolan films have been marred by overexplaining the premise. This film breaks free of such cumbersomeness, with many moments being sparse of dialogue.

Extremely powerful and exciting war movie about the evacuation during WW2. Driven by a non-chronological narrative in three point of views, the breathless editing and a nerve-wracking score the film delivers several nail-biting sequences and a very powerful and emotional ending. The cast mostly relies on no names and very few stars, all bringing very convincing performances to the table. Additionally, the film is beautifully shot. Another masterpiece by Nolan and a highlight of the genre.

It's now fair to say that Christopher Nolan has become a director that instils huge anticipation when he announces a new film project. He's equally adept at providing low-key, personal, thrillers like Memento and Insomnia and more than proved his worth with big-budget spectacles like The Dark Knight Trilogy, Inception and Interstellar. It's fitting then that he tackle a war drama - a genre that demands an element of both approaches. After Steven Spielberg shell-shocked us with Saving Private Ryan and Terrence Malick encouraged us to ruminate and philosophise with The Thin Red Line, anyone treading the same ground had huge boots to fill. On this occasion, Nolan does an admirable job but I'd have to be honest and say that he doesn't quite reach the high benchmark that had already been set by these contemporary films. Plot: In May 1940, WWII, the German army advanced into France, surrounding 400,000 Allied troops on the beaches of Dunkirk. Using every means possible, an evacuation plan took place that, if unsuccessful, meant the tide of the war would have almost certainly swung in the Nazi's favour and would've had worldwide implications. Where Malick and Spielberg excelled in the land battles of WWII, Nolan's biggest achievement is in the air or at sea and it seems to me that this was a safe and deliberate approach. The Thin Red Line and Saving Private Ryan are hard to match in my view and Nolan is astute enough to know this. As expected, he goes big but although it sounds like a paradox, he also keeps the film very intimate as well. There are some impressive scenes on a huge scale but, to my surprise, Nolan focuses more on the intimacy of the men stuck in this horrendous battle for survival and that's ultimately where my surprise led to feelings of disappointment. Nolan keeps the running time fairly brief for a story of this magnitude but I couldn't help but feel there was more to tell here. It's hard to describe as this film really should've been something that I fully embraced. I normally love big spectacle war movies and I'm somewhat fascinated with the history of WWII but, with this in mind, Dunkirk left me a little cold. The script is threadbare, to say the least, and there isn't one particular character to pin any attachment to. The triptych nature of the film dedicates itself to the troops of the land, the sea and the air but, unfortunately, these three stories didn't quite come together as a whole. It felt disjointed and in some instances, incoherent, with neither one of the stories feeling like it had any real substance to it. I consider Malick's The Thin Red Line a masterpiece and Spielberg's effort just as much (minus the flag waving jingoism) and while Nolan had a similar opportunity here, Dunkirk lacked the emotional core that these two films so viscerally provided. Ultimately, Nolan comes to the table with a vision but fails to bring a script with him. At the time of writing this, I can't even remember one characters name. You could say that this was Nolan's intention in that it's a collective experience and no individual man is at the forefront but then why cast such recognisable actors as Kenneth Branagh, Mark Rylance, Cillian Murphy and Tom Hardy only for them to be woefully underused? Hardy, in particular, spends the majority of his screen time with a mask on his face (The Dark Knight Rises, anyone?) while saying very little and although he's involved in the film's most impressive scenes while navigating the ariel battles in his Spitfire, these moments don't need an actor like him where he's unable to provide his usual gravitas. It's also a bit jarring that you're constantly reminded that it has a member of pop band One Direction. This is no criticism of Harry Styles - who happens to be quite decent - but why do it in the first place? As a visual spectacle, Nolan really provides the goods and he's aided immeasurably by the exemplary work of cinematographer Hoyte van Hoytema with his stunningly captured landscapes in bringing a real vastness to the experience while Hans Zimmer's score compliments the visuals and contributes a tense and nail-biting vibe to the action. It's, undoubtedly, a beautifully shot film but it's not as the critics have described and I just feel that the story of Dunkirk could have been given a bit more justice. It's a good film but, sadly, I expected more. Nolan manages to take a moment in history - that I respect and care deeply about - but depicts it with characters I couldn't care less about. Mark Walker

Powerful, stunning, and exceptionally crafted by Nolan (his second best film after Dark Knight), Dunkirk is a landmark achievement that deserves the highest of praises and the highest of awards.