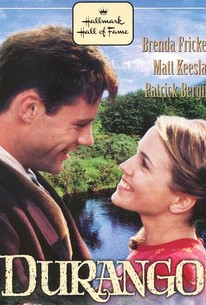 Durango (A Rose for Annie) Photos

In this drama set in Ireland in the 1930s, Mark Doran (Matt Keeslar) is a young man who has grown up on a cattle farm and has fallen in love with lovely Annie Mullaney (Nancy St. Alban). However, Annie's father Fergus (Patrick Bergin) regards Mark as a callow youth and insists that he prove his manhood before Mark can ask for his daughter's hand in marriage. Mark sees an opportunity to prove himself and help his family at the same time when he becomes angry with the low prices offered by a local cattle broker; Mark decides that he will instead drive his herd 40 miles to the next available market, where's he's sure that they will bring in more money. Mark sets out to play cowboy with his rough-and-tumble Aunt Maeve (Brenda Fricker) in tow, but they soon run into interference from angry ranchers unhappy with Mark's stunt. Durango was produced for television as part of the acclaimed drama anthology series Hallmark Hall of Fame.

Critic Reviews for Durango (A Rose for Annie)

Entertaining Western with a twist

There are no featured reviews for Durango (A Rose for Annie) at this time.

Durango (A Rose for Annie) Quotes