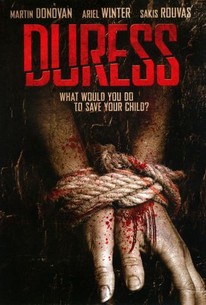 A father mourning his wife's recent suicide must race to save his daughter after becoming the target of a sadistic serial killer who brings out his inner psychopath. Months after his beloved wife took her own life, Richard Barnett (Martin Donovan) has lost the ability to connect with their young daughter. He's at the end of his tether when he wanders into a local donut shop for a late-night cup of coffee, and crosses paths with a maniac who forces him to kill at gunpoint. Just when Richard thought his life couldn't get any worse, the cunning lunatic threatens to kill his daughter unless he plays a gruesome game of death.

There are no critic reviews yet for Duress. Keep checking Rotten Tomatoes for updates!

There are no featured reviews for Duress at this time.