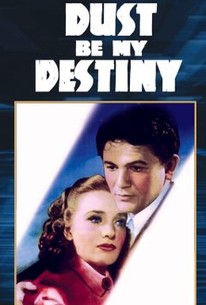 Dust Be My Destiny Photos

John Garfield once more plays a social outcast who's had nothing but lousy breaks. Released from prison for a crime he didn't commit, Garfield is promptly arrested as a vagrant and sent to a work farm. He falls in love with Priscilla Lane, stepdaughter of the farm's no-good foreman. Garfield marries Priscilla, but his happiness is short-lived when the foreman drunkenly goads him into a fight. Arrested again for killing the foreman, Garfield is defended by a compassionate attorney (Moroni Olsen), whose summation to the jury places the blame for Garfield's plight squarely on the shoulders of Society.

William B. Davidson
as Warden

George Guhl
as Policeman on Street

Ethan Laidlaw
as Policeman in Montage

Critic Reviews for Dust Be My Destiny

The combined talents of John Garfield and Priscilla Lane, could not be better utilized. [Full review in Spanish]

The trite script greatly benefits from the star power of John Garfield, who plays the perfect role for him--an alienated, wise guy drifter.

Audience Reviews for Dust Be My Destiny

Garfield and Priscilla Lane always made a good team and this is one of their best pictures. Being a Warners film the subject of a young couple in love and on the run is given the gritty treatment that suits the story and the pair do very well in conveying the hardships faced. As with most of the studios film at the time it looks at the problem through the lens of current events and society's ills.

Dust Be My Destiny Quotes