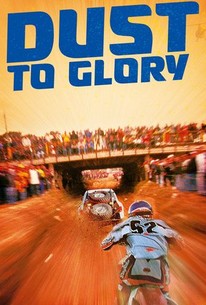 Critics Consensus: Amazing footage from the Baja off-road race will give viewers an adrenaline rush.

Critics Consensus: Amazing footage from the Baja off-road race will give viewers an adrenaline rush.

Critic Consensus: Amazing footage from the Baja off-road race will give viewers an adrenaline rush.

Documentary filmmaker Dana Brown, who created a visually striking look at the world of surfing in 2003's Step Into Liquid, hits dry land running in this portrait of the world of off-road racing. The Baja 1000 is one of the world's premier desert racing events; taking place both on and off the roads in and around Baja California, the annual road rally pits drivers against punishing conditions as they attempt to cover the thousand-mile course in 36 hours or less. With a wide variety of different vehicles competing -- from modified trucks to stock Volkswagens -- Dust to Glory takes viewers into the middle of the race, with camera crews following in the action while several drivers race with cameras mounted to their cars for a "you are there" perspective. Dust to Glory also puts a special focus on driver Mike "Mouse" McCoy, who hopes to achieve a unique distinction as one of the first drivers to drive the entire one-thousand-mile course by himself (most vehicles employ a team of drivers for the long and demanding race). Dust to Glory director Dana Brown is the son of Bruce Brown, director of such legendary sports films as The Endless Summer and On Any Sunday. ~ Mark Deming, Rovi

Critic Reviews for Dust to Glory

A total hodge-podge of relatively random footage from the Baja 1000.

Contestants have 32 hours to finish the race, and unless off-road racing is your thing, Dust to Glory can sometimes feel like it lasts about that long.

As with Step into Liquid, Brown proves in Dust to Glory that the thrill of high-speed racing can be shared by fans and non-fans alike.

I can't say Dust to Glory... qualifies as a great documentary, but it chronicles an event that speaks to the raw instinct to face a challenge and conquer it.

Brown does a very good job of getting across the daredevil thrill of it all.

"Dust To Glory" is a satisfying thrill ride that allows the viewer to experience the raw excitement of a race that few people have the stones or mental wherewithal to participate in.

Brown lays the sentimentality on so much that it almost brings the whole production down. Luckily there's lots of tremendous shots and a solid story to keep it going.

One needn't be an auto racing fan to appreciate the athletes depicted in Dana Brown's intriguing documentary about the Baja 1000 off-road race.

The images from this wild race are spectacular at times.

Dust to Glory is a valentine from a committed fan, full of gee-whiz idolizing that -- for this viewer, anyway -- quickly wears thin.

Short of attending in person, Dust to Glory is the best way to experience what one driver called 'a 24-hour plane crash.'

Audience Reviews for Dust to Glory

There are no featured audience reviews yet. Click the link below to see what others say about Dust to Glory!