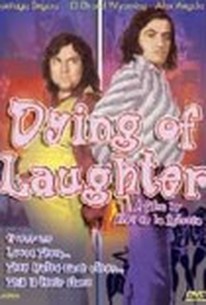 Show business legend is full of stories about comedy teams who don't get along offstage, but Muertos De Risa/Dying Of Laughter takes this notion to new heights in this story about two comedians who hate each other so much that it leads to attempted murder. In the early 1970's, Nino (Santiago Segura) is a nightclub singer whose career is going nowhere, and Bruno (El Gran Wyoming) is a comic who isn't doing any better. A talent agent, Julian (Alex Angulo), teams them up for a sketch on a popular TV show, and when Nino is suddenly stricken with stage fright on camera and can't speak, Bruno impulsively slaps him. The audience finds this hilarious, and their career as a duo is off and running -- while their personal relationship starts at a low point and keeps getting worse. Over time, Bruno steals Nino's girlfriend, Nino gets arrested for dealing drugs, the act periodically breaks up and reunites, and in the midst of a New Year's Eve broadcast in 1992, the two exchange gunfire on live TV. Starring two of Spain's most popular comedians, Muertos De Risa/Dying Of Laughter was massively popular in its initial release, and boasts exacting recreations of the look and mood of each decade presented, as well as witty references to Spain's contemporary political and social history. ~ Mark Deming, Rovi

There are no critic reviews yet for Muertos de risa (Dying of Laughter). Keep checking Rotten Tomatoes for updates!

There are no featured reviews for Muertos de risa (Dying of Laughter) at this time.