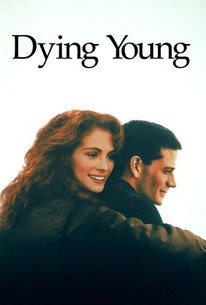 Critics Consensus: Dying's easy; it's making audiences care about the romance at the heart of this inert drama that proves difficult.

Critics Consensus: Dying's easy; it's making audiences care about the romance at the heart of this inert drama that proves difficult.

Critic Consensus: Dying's easy; it's making audiences care about the romance at the heart of this inert drama that proves difficult.

In Joel Schumacher's Dying Young, Julia Roberts plays Hillary O'Neil, a carefree young middle-class woman who falls in love with wealthy leukemia victim Victor Geddes (Campbell Scott). Many of the scenes take place during Victor's chemotherapy sessions, so you can guess that this isn't a barrel of laughs. When originally previewed, the film carried the tragic ending found in its source, a novel by Marti Leimbach. None of the test audiences cared for that, so, for the umpteenth time, a Julia Roberts vehicle was shipped to general audiences with a totally revised denouement. Campbell Scott's real mother, the late Colleen Dewhurst, plays his "reel" mother in Dying Young.

Alex Trebek
as Host of `Jeopardy'

Howard Morris
as Voice on Jetsons

Trevor Fant
as Child in Hospital

Kevin O'Connor
as Child in Hospital

Lauren Oymainan
as Child in Hospital

Erin Vallely
as Child in Hospital
View All

Donate the ticket money you would have spent to medical research, and stay home.

Yes, it is good to see how much of a difference actors can make with flimsy material, but wouldn't it be nice if they had something with more than the emotional weight of a Twinkie to work on?

The onslaught-of-illness stuff is rendered not with emotion but with makeup and lighting. The actors are reduced to models in a film that tries to sell compassion by the shot.

These people are like an adolescent's idea of adulthood. They're junior high schoolers without zits, emotionally arrested and unaware of it.

Will someone please, please, write a part for Julia Roberts and not be happy just to look at her?

It also lacks cuteness, which a movie of this sort needs. A film as predictable as this one is seriously in need of scenes that stand out, scenes that give the movie a little life, no pun intended.

This is an upsetting, moving film -- not one for the weak of stomach, mind or heart.

Dying Young belongs to the luminous Roberts. She is becoming one of the screen's finer actresses.

She gave him something nobody else could. A reason to live.

Nothing groundbreaking but good.

Sappy. It's so sappy that it's like the sap that drips onto your car and removes the paint.