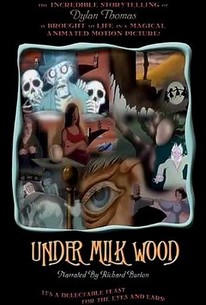 This film is a faithful rendition of Welsh poet Dylan Thomas' last major poem, Under Milk Wood. It affectionately examines the day-to-day life of the inhabitants of a small Welsh fishing village. The poem is narrated by Richard Burton, himself a Welshman and a great aficionado of Thomas' work. The narrative framework comes through the character of Captain Cat (Peter O'Toole), a retired seaman who, though blind, knows the village and its inhabitants so well, it is as if he could see. The colorful characters of the village are delineated in short vignettes by a host of very distinguished British actors. Elizabeth Taylor, Burton's wife at the time, makes a brief appearance as Rosie Probert. ~ Clarke Fountain, Rovi

Mark Jones
as Evans the Death

The images that Director Andrew Sinclair has added to his film adaptation do not complement Thomas' language; they detract from it.

Writer-director Andrew Sinclair has a wonderful feel for his material, and a happy hand in matching it to its setting.

Too many words, I'm convinced, for the screen. It's not simply the quantity of words, though. It's also their ornateness. They overflow the ears and get into the eyes.

The winning film of the moment is Under Milk Wood, Andrew Sinclair's beautiful screen adaptation of the Dylan Thomas play, a triumph of visualization of the verbal visions and vignettes the poet created.

Intended solely for the fans of Thomas and for those of intelligent character studies.

Unwise physical materialisation of a play for voices.

All things considered, this is a fairly good adaptation of an impossible play to adapt.

The film, faithful to the poem, offers an endearing, often humorous, examination of Welsh life.

It is an ensemble piece for the most part, so don't expect an abundance of screen time from the three leads. As much as I hate to say it (with a cast like this) this one's not really about the acting...It's more about the writing of Dylan Thomas and the quirky beauty of the Welsh seaside, brought to life here with his words and some wonderful imagery. Not suitable for everyone's tastes I'll admit, but if you enjoy clever writing (and can understand sometimes thick Welsh accents) you are in for a treat.

Beautiful settings and a game cast are about the only things this has going for it. The kind of film that killed Liz and Dick's careers in the late 60's-early 70's.