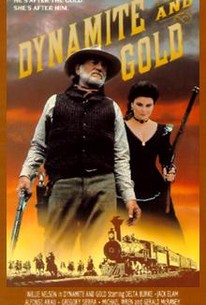 Dynamite & Gold is the videocassette title of the made-for-TV western comedy Where the Hell's That Gold? Willie Nelson plays a bank robber, Delta Burke his "moll" and Jack Elam and all-around gol-durned sidewinder. The three stars scrounge for a hidden fortune in stolen gold, fending off other outlaw gangs and Mexican revolutionaries (among them famed Latino actor/director Alfonso Arau). The story's high point, a wild train ride, takes place somewhere in mid-film. Where the Hell's That Gold was written and directed by western stalwart Burt Kennedy; it originally aired November 13, 1988.

Critic Reviews for Dynamite and Gold

There are no critic reviews yet for Dynamite and Gold. Keep checking Rotten Tomatoes for updates!

There are no featured reviews for Dynamite and Gold at this time.