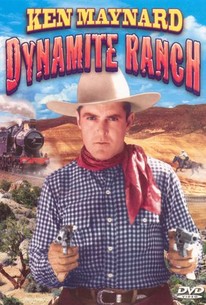 Having signed for eight Westerns with poverty row entrepreneur E.W. Hammons, Ken Maynard went on to deliver a series of solid sagebrush entertainment despite non-existing budgets and filming on standing sets at the old, threadbare Tiffany lot on Sunset Boulevard. The opener, Dynamite ranch presented Ken as a cowboy falsely accused of safe-cracking.The robbery was actually committed by villainous foreman Park Owens (Alan Roscoe) but only the rancher's daughter, Doris (Ruth Hall), believes in his innocence. But even she turns against the cowboy when his glove is found on the crime scene. When the assistance of the rancher's accountant (Arthur Hoyt), Ken sets a trap for Owens and manages to clear his own good name. As a sign of changing times in Hollywood, former silent star Jack Perrin appears at the bottom of the cast-list playing one of Owens' henchmen.

Tarzan the Horse
View All

Its main problem is that the star cowboy, Ken Maynard, is so wooden an actor and has a squeaky voice, that he's unconvincing as the hero.

There are no featured reviews for Dynamite Ranch at this time.