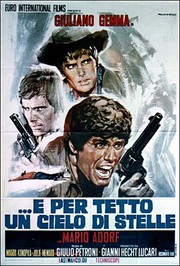 ...e per tetto un cielo di stelle (A Sky Full of Stars for a Roof)

...e per tetto un cielo di stelle (A Sky Full of Stars for a Roof) Reviews

Senor C
December 24, 2011
Giulio Petroni's follow up to the classic Death Rides Horse isn't as successful (w/out the cool ass Lee Van Cleef how could it be?) but it does prove he's more then capable & knows the genre even though this is a more light weight affair. Giuliano Gemma & Mario Adorf make for a good teaming that @ times this almost plays like a comedy but it never feels forced like you might get w/ Bud Spencer or Terence Hill in a Trinity movie. It just has a causal ease to it. Includes a great erotic scene involving turkey & beer. Who knew that poultry could be such a turn on? After I eat the gobbler I just want to nap..not fuck

Eric R
June 12, 2011
"A Sky Full of Stars for a Roof" is hands down one of the most bizarrely titled Spaghetti Westerns I have ever seen but don't let the odd title detour you as this an interesting light hearted Spaghetti Western comedy from the director of the powerhouse "Death Rides a Horse" and two strong leads to complement to work with.

The film opens with a violent sequence where a stagecoach is brutally attacked by a gang who blow every last soul away. Morricone's haunting score starts in as the camera pans over the massacre and then stops in on the innocent face of a blond girl. In comes Giulano Gemma, who brushes dust from her face amidst a dust storm. With a despaired look, he and a stranger decide to bury the bodies. This opening is amazing and very moving thanks to Morricone's beautiful, emotional score.

This opening however sets up the film wrong as this isn't a completely serious western. The rest of the film we follow hustler Giuliano Gemma as he swindles block head Mario Adorf (whom Italian film fanatics might recognize from Fernando Di Leo's "Caliber 9" and "The Italian Connection") for the remainder of the film whilst trying to escape a deranged psychopath on his tail.

Gemma and Adorf have great chemistry together and it's nice to see Adorf in a more laid back role as all the films I have seen with him have been deadly serious. Gemma's role is also more laid back, lacking the violent mean streak I adored in many of his other films. Let's just say I'm glad this isn't the first Gemma film I ever saw as he isn't near as comfortable in the laid back comedic roles.

Director Giulio Petroni still has a nice style and makes the film look like it has double the budget it does with wonderful camera work and lots of atmosphere thanks to blowing sand. His cunning gunman / dimwitted gunman buddy plot works surprisingly well for the most part.

I'm not a huge fan of Spaghetti Western comedies but this one isn't bad but the amazing opening sequence makes the rest of the film somewhat of a letdown. This classic opening really doesn't feel like it belongs in the film, like it should be the opening of a completely different, serious western. Morricone's wonderful score also feels like it belongs in a serious western as opposed to a comedic one and for that his score can feel at odd with the images moving before your eyes. Perhaps if the entire film was treated with the same seriousness as the opening would this film be better known in the Spaghetti Western community.