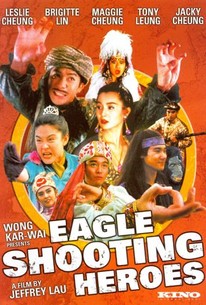 This parody, produced and acted by some of the top names in Hong Kong films, offers a send-up of martial arts films. The basic storyline is taken from the 1950's swordplay novel The Eagle Shooting Heroes by Louis Cha. Third Princess holds the imperial jade seal. She is being chased by two crazed Taiwanese who want that seal. Third Princess enlists the aid of a young swordsman and together they set out to find a powerful kung fu manual. They are followed by the swordsman's jealous lover, and by a beggar king who believes himself related to the princess. Along the way, they encounter several strange characters including an effeminate Indian Buddhist, a gay Taoist, and a gorgeous court magician. The film is filled with action, gymnastic feats, and pratfalls.

Kenny Bee
as Wang Chung-yang, the Taoist
View All

This is one of the most enjoyable...action-fantasy-comedy-romances you are ever likely to see - a film that delivers the colorful costumes, acrobatic action, and supernatural thrills associated with the genre while adding a winning dose of humor.

Has a lot of great looking action, but it moves awfully fast and the comedy and acting is very, very broad