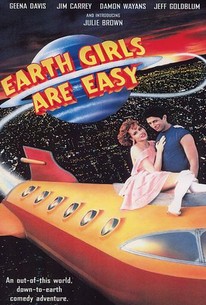 Critics Consensus: Earth Girls Are Easy is messy, silly, and not particularly bright -- qualities it comes by honestly and deliberately.

Critics Consensus: Earth Girls Are Easy is messy, silly, and not particularly bright -- qualities it comes by honestly and deliberately.

Critic Consensus: Earth Girls Are Easy is messy, silly, and not particularly bright -- qualities it comes by honestly and deliberately.

In this madcap comedy, Geena Davis plays Valerie, a manicurist living in the valley with her cold fiancé, Dr. Ted Gallagher (Charles Rocket). At the Curl Up and Dye beauty salon where she works, Valerie enlists the help of her boss, Candy Pink (Julie Brown), for some style advice to try and win back Ted's affections. After undergoing a brand-new hairstyle, Valerie learns that Ted is having an affair and she kicks him out of the house. Soon, while lounging around in her bikini, a spaceship from the planet Jhazzalan crash-lands in her swimming pool. Curious, Valerie befriends the ship's inhabitants -- three horny aliens covered in fur named Mac (Jeff Goldblum), Whiploc (Jim Carrey), and Zeebo (Damon Wayans). Introducing her new friends to Candy, the aliens get a shave and a total makeover transformation into hot, available dates. They all go out dancing at L.A. nightclubs and party.

Leslie Morris
as Mike the Cop

Lisa Boyle
as Curl Up and Dye Dancer

Larri Thomas
as Curl Up and Dye Dancer
View All

As funny and silly as ever, it's even more interesting to watch as a period piece, exulting in the dream of the San Fernando Valley of the 1980s.

Intended by director Julian Temple and his screenwriters to affectionately skewer Tinseltown lifestyles.

This is deliberately, gleefully vacuous entertainment, and any satirical edge is blunted by the film's obvious affection for its subject.

It is a joyfully chaotic and wildly uneven work that shows Mr. Temple's roots in music videos.

When it's time for that inevitable return to the planet Jhazzalan, you may hear yourself breathing a sigh of relief.

Earth Girls Are Easy manages to both subvert and give in to the conventions of its time, creating a work so singularly absurd and campy, you can't not enjoy it.

...a larger-than-life premise that's employed to affable yet mostly forgettable effect by Temple...

Hey whaddaya know, I do like 'em big and stupid! Geena Davis is charming as always in this dumb, ephemeral, pleasurable movie about aliens in late '80s LA.

It's fluff. Is it ever. But at least it's female-oriented fluff, more or less.

Silly, sexy, and filled with music.

A horrible mess of genres that does nobody involved justice.

An out-of-this-world, down-to-earth comedy adventure. Good classic movie. An early work from the great Jim Carrey and he was as wacky as he is now. The story was so-so nothing big, it's meant to be funny and entertain and to me it did it's job. Nice ending. Love amongst the stars is every 'valley' girls dream.... and for Valerie (Geena Davis - The Fly) it's a dream come true when love literally crash lands into her life in the form of intergalactic hardware plunging into her pool. For the three amorous aliens at the helm (Jeff Goldblum - The Fly)(Jim Carrey - Ace Ventura)(Damon Wayans - Blank Man) the sight of an 'earth girl' in the shapely form of Valerie had proved too arousing, letting controls get out of hand! Life in San Fernando Valley for these three hirsute aliens goes to full thrust when a short back and all over reveals three gorgeous hunks who become the ultimate accessory for every valley girl. But an interplanetary love affair presents Valerie with a dilemma your average valley girl doesn't have to face - love amongst the stars or down in the dumps in L.A!

What a stupid movie! This movie has an excellent cast, but a horrible script. One of the worst movies of the 80s.

A funny flick with a few surprising actors in it. Silly.