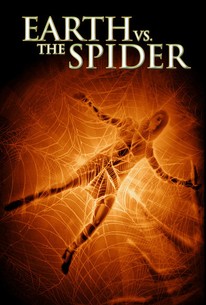 Earth vs. the Spider Photos

This film was part of Cinemax's Creature Feature films, which remade classic American-International monster films from the '50s. Quentin Kimmer (Devon Gummersall) believes he will turn himself into his idol, the Arachnid Avenger, when he injects himself with spider serum. As with Jeff Goldblum's character in Cronenberg's remake of The Fly, Kimmer mutates into a frightening monster. Dan Aykroyd, Theresa Russell, and Christopher Cousins round out this effort from Scott Ziehl.

Zia Harris
as Gutterpunk No. 1

Lloyd Lowe Jr.
as Gutterpunk No.2

Michael Keenan
as Willie the Drunk

News & Interviews for Earth vs. the Spider

Fox Wants to Tell You a "Tokyo Ghost Story"

View All Earth vs. the Spider News

Critic Reviews for Earth vs. the Spider

The end result is a competent little chiller, oftentimes using a less-is-more approach that works remarkably well with its limited resources.

A worthwhile genre entry that's less about science playing God and more about the dangers of losing the ability to distinguish between reality and fantasy.

Takes far too long to get to its point.

Audience Reviews for Earth vs. the Spider

Take a Spider-Man base and add a jigger of the Cronenberg's Fly, mix with a dash of toxic avenger and you get Earth vs. The Spider. Based on a script by Jurassic Park's conceptual designer Mark 'Crash' McCreery, the concept sound like fun on paper "a comic book nerd gets injected with an experimental serum and starts to gain the abilities of a spider, like being able to shoot webs...from his abdomen. He decides this is awesome and starts to fight crime, except unlike Peter Parker he's got deep seated issues so he gets himself in trouble. It's also got bit parts from Dan Aykryod, John Cho and a chic who stole Denise Richards DNA. It unfortunately never lives up to it's potential as it's story meanders all over the place, taking it self WAY to seriously to be fun.

Earth vs. the Spider Quotes