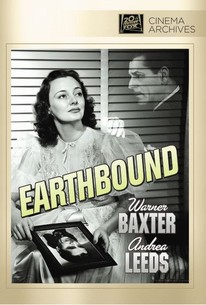 Future blacklistee John Howard Lawson co-wrote this remake of Samuel Goldwyn's 1920 drama Earthbound, presented here as a rather more straightforward morality tale/fantasy. Warner Baxter and Andrea Leeds star as Nick and Ellen Desbrough, a seemingly happily-married couple celebrating their fifth anniversary at the outset of the movie. But Nick hasn't been nearly as faithful as Ellen believes, and his one-time romance with Linda Reynolds (Lynn Bari) has come back to haunt him. He believed the relationship was safely ended long ago, and Linda to be in love with his longtime friend Jeffrey Reynolds (Henry Wilcoxon) -- but she still wants Nick, and when he rejects her, she shoots him in a fit of jealous rage. Jeff takes the blame for the murder and is put on trial, while Nick -- now a wraith-like figure caught between heaven and earth -- tries desperately to communicate with Ellen or anyone else, to no avail, to tell them of Jeff's innocence. The only person with whom he can communicate is a mysterious man (Charles Grapewin) who seems to know a great deal about where Nick has been and also where he might -- or might not -- end up. Confronted in death by all of the unhappiness that his faithless life has caused, Nick vows to try and repair some of the damage, but it may take a miracle for that to happen.

Pierre Watkin
as President of the Court

Clark Morgan
as Man in Cafe

There are no critic reviews yet for Earthbound. Keep checking Rotten Tomatoes for updates!

There are no featured reviews for Earthbound at this time.