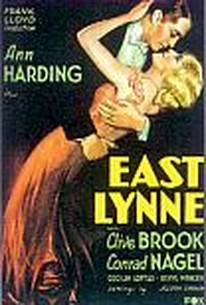 Whenever a vaudeville comic of the 1920s wanted to get a quick laugh, he'd announce to his audience "Next Week: East Lynne." To many playgoers, this hoary stage adaptation of Mrs. Henry Wood's 1861 novel represented the height of Victorian nonesuch. Still, there were several silent film versions of East Lynne, all of which made money. 1931 yielded no fewer than two adaptations, one set in modern times and retitled Ex-Flame. Fox Studios' version restored the original title and the 1860s setting, but couldn't do much with that creaky plot. Ann Harding portrays Lady Isabel Carlisle, who nearly a decade of family hardships learns that her son has fallen ill. Despite being nearly blind as the result of a bomb explosion, Lady Carlisle returns home to see her son one last time--just before dying herself.

Wally Albright
as William, as a Boy

Ronnie Cosbey
as William, as a Baby

Mr. Brook acts with his usual restraint. Miss Loftus is capital as the sinister Cornelia.

An excellent piece of work in taking a legendary meller play and transposing it into a screen drama of strength and charm.

Good cast rises above the extravagantly emotional and sentimental material.

Ann Hardin gives a solid performance in this melodrama about a woman who goes blind after being deserted.

There are no featured reviews for East Lynne at this time.