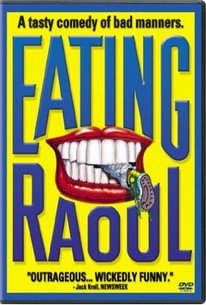 Critics Consensus: Eating Raoul serves up its spectacularly lurid tale with a healthy heaping of pitch-black humor and anarchic vigor.

Critic Consensus: Eating Raoul serves up its spectacularly lurid tale with a healthy heaping of pitch-black humor and anarchic vigor.

Eating Raoul was celebrated at the time of its release as the perfect marriage between mainstream moviemaking and the so-called "underground" cinema. Cult-film icons Mary Woronov and Paul Bartel (both of whom directed) play a married couple who decide to cash in on the sexual perversions of others. Posing as a hooker, Woronov lures the "johns" in and indulges their every kinky whim, whereupon Bartel kills the unwary client, steals the valuables, and sells the corpse for dog food. Though they see nothing wrong in what they're doing, they react in prudish disgust at the sexual preferences of their victims. Eventually, Raoul (Robert Beltran), the fellow who transports the corpses to the dog food concern, proves expendable--and extremely edible. Eating Raoul features a high-powered comic supporting cast, among them Buck Henry, Ed Begley Jr., Richard Paul, Hamilton Camp, and Edie McClurg.

Paul Bartel's Eating Raoul is about lurid sex, murder, cannibalism and greed. It's also the best comedy of the fall season.

Problem is, it's so laid-back it eventually gets monotonous. If the style and pacing had been as outrageous as the subject matter, we might have had something really amazing here.

Made on a non-existent budget, here is a kick right in Hollywood's bloated butt.

Nicely lays out capitalism on the chopping block. In an obsessively consumptive culture like America's, the only way for a common couple to strive is through killing, then consuming.

Despite the consistency of the film's droll take on murder and mayhem, it still feels oddly uneven and skimpy, as if there just isn't quite enough meat on its narrative bones.

Bartel's cult classic paved the way for many rude satires about sex, murder, and cannibalism.

The acting duo of Mary Woronov and Paul Bartel deliver a nonchalant comedic style of delivery, this odd matter-of-factly placidness in a sea of mayhem abounding...Read on->

Eating Raoul is a lively black comedy about the aftershocks of the sexual revolution in America.

It's hard to resist this sardonically riotous black comedy, even if you know the ingredients in the gourmet meal are disgusting.

Overrated cult comedy isn't nearly as funny as it thinks it is.

This movie had such a mystique about it that it could not live up to the expectations I had, but now I can say I have at least watched it.

A very funny cult movie, I really liked it, the story is really good too.The only thing I didn't really like was the ending, but still, I highly recommend it.