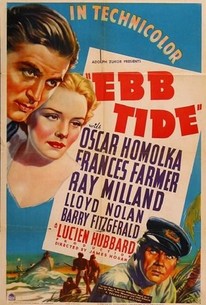 Technicolor is the main attraction of this overheated South Seas adventure. Ray Milland, Akim Tamiroff and Barry Fitzgerald play three shifty sailors who commandeer a smallpox-ridden boat and set out to sea. A typhoon washes them ashore on a faraway Pacific island, which is ruled by a white religious fanatic (Lloyd Nolan) who has set himself up as the local god. The three sailors anxiously await an opportunity to appropriate the "god's" valuable stash of pearls and head for the mainland. Only one of the sailors escapes to tell his story; check out the cast list and guess which one survives. The third filmization of Robert Louis Stevenson and Lloyd Osborne's novel, Ebb Tide is rough going until Lloyd Nolan shows up to deliver the picture's best and subtlest performance. The story would be filmed again in 1947 as Adventure Island.

Ebb Tide brings us a breath of Stevenson adventure, a typhoon, a Hollywood romance, and two outstanding performances by Oscar Homolka and Barry Fitzgerald.

There are no featured reviews for Ebb Tide at this time.