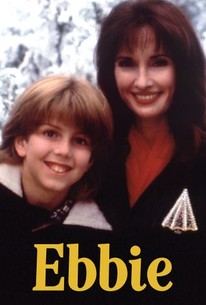 When Tori Spelling starred in the Dickens-inspired 2003 TV movie A Carol Christmas, more than a few viewers with long memories could not help but point out the similarities between Spelling's film and the 1995 made-for-cable Susan Lucci vehicle Ebbie--beginning with the fact that both films were distaff versions of the venerable "A Christmas Carol." It's Christmas Eve, and ruthless department store owner Elizabeth "Ebbie" Scrooge (Lucci) is cruelly running her employees ragged, dangling their meager bonus checks over their heads to get them to work all the harder. Just before closing time, Ebbie manages to fire a longtime security guard, humiliate her niece, and force her aide Roberta "Robbie" Cratchet (Wendy Crewson) to work on Christmas day rather than spend precious time with her family. Thus the stage is set for the inevitable nocturnal visitation from Ebbie's long-dead partner Jake Marley (Jeffrey DeMunn) and the usual Three Spirits, bound and determined to transform the vituperative Ms. Scrooge into the salt of the earth. And yes, Tiny Tim shows up too, in the person of dewey-eyed kid actor (Taran Noah Smith). To her credit, Susan Lucci plays this nonsense as if it were Shakespeare, bringing depth and conviction to an impossibly contrived teleplay (for which Charles Dickensreceives no screen credit!) Ebbie was first telecast by the Lifetime cable channel on December 4, 1995.

Nicole N. Parker
as Ghost of Christmas Past #2

Malcolm Stewart
as Patterson
View All

There are no critic reviews yet for Ebbie. Keep checking Rotten Tomatoes for updates!

There are no featured audience reviews yet. Click the link below to see what others say about Ebbie!