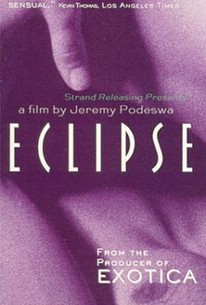 Desire, the fleeting pleasures of casual sex, and the difficulty involved with keeping passion alive are the focus of this unusual Canadian drama. The film, which was shot alternately in black and white, and color, is set in modern Toronto days before a solar eclipse is to occur. For his high school project, Angelo is filming a documentary on eclipse fever. His work is presented in color as he interviews people about the eclipse. Interspersed between Angelo's film is a series of sexual scenes, shot in black and white, involving gay and straight encounters between 10 friends, lovers, and acquaintances. What makes the film unique is that a connected progression occurs as one character from a preceding sexual encounter always appears in the subsequent one.

Not sure if the co-relation between love and eclipses really worked for Jeremy.