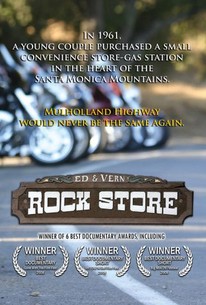 Nearly fifty years after Ed and Veronica "Vern" Savko opened their modest California rest stop along a twisting stretch of the Mulholland Highway, the iconic pit stop known as the Rock Store is still going strong thanks to the motorcyclists and drivers who have kept the tradition of the Sunday drive alive years after it went out of style. It was shortly after the end of World War II, when the Unites States' economy was booming, that Americans truly fell in love with the automobile. Each Sunday, families would pile into the car for a leisurely drive. A cornerstone of that tradition was the roadside pit stop, small "mom and pop" style stores where families could stop and get a hearty meal during their relaxing day trip. Eventually, progress and want of convenience drove the vast majority of these independent stores out of business - but not all of them. Ed and Vern have been the owners and operators of the Rock Store since the early 1960s, and most local motorists couldn't imagine a drive though Southern California's Santa Monica Mountains without a stop at this thriving artifact of Americana. Over the years, the place that was originally built as a stagecoach stop has become a popular destination for tourists, joy-riders, and motorcyclists. Celebrities such as Steve McQueen, Ewan McGregor, and Arnold Schwarzenegger have all been spotted dining at the Rock Store, though maintaining this landmark hasn't always been easy due to such obstacles as forest fires and controversial road closures. For those who have never had the pleasure of visiting the Rock Store, this film highlights how Ed and Vern helped to shape the town of Cornell, California while keeping the tradition of the Sunday drive alive and well: For those who visit the Rock store frequently, this film offers a colorful look at the rich history behind a motorcycle mecca and popular weekend destination spot.

There are no critic reviews yet for Ed & Vern's Rock Store. Keep checking Rotten Tomatoes for updates!

There are no featured reviews for Ed & Vern's Rock Store at this time.