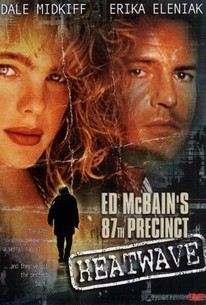 Not only is the teeming metropolis of Isola in the grips of its worst heat wave in history, but the city is also in the thrall of a serial rapist who is targeting his previous victims. Hoping to stop the predator in his tracks, police detective Eileen Burke (Erika Eleniak) goes undercover, posing as one of those prior victims -- only to be raped for real by the elusive assailant. Thus does the search for the perpetrator become a personal mission, especially for Eileen's detective boyfriend, Bert Kling (Paul Johansson). Along the way, the media's culpability in making celebrities out of scumbag criminals is carefully scrutinized, dissected, and condemned. Inspired by Evan Hunter's popular "87th Precinct" novels (written under Hunter's nom de plume , Ed McBain), this made-for-TV thriller features most of Hunter's familiar recurring characters, among them detectives Meyer Meyer (Paul Ben-Victor) and Steve Carella (Dale Midkiff), as well as Carella's deaf-mute wife, Teddy (Andrea Ferrell). Ed McBain's 87th Precinct: Heatwave made its ABC network bow on January 12, 1997.

There are no critic reviews yet for Ed McBain's 87th Precinct: Heatwave. Keep checking Rotten Tomatoes for updates!

There are no featured reviews for Ed McBain's 87th Precinct: Heatwave at this time.