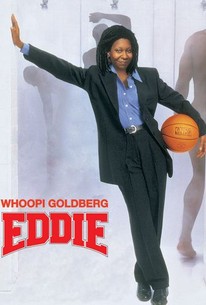 Critics Consensus: Whoopi Goldberg may demonstrate that she can coach a basketball team with the best of them, but not even she can whip this dreary script into shape.

Critics Consensus: Whoopi Goldberg may demonstrate that she can coach a basketball team with the best of them, but not even she can whip this dreary script into shape.

Critic Consensus: Whoopi Goldberg may demonstrate that she can coach a basketball team with the best of them, but not even she can whip this dreary script into shape.

A few real NBA players populate this Whoopi Goldberg comedy about a Knicks fan who becomes their feisty coach and overcoming gender biases and tremendous credibility gaps, manages to turn the fictionalized losers into a winning team. Goldberg plays a limo-dispatcher Eddie who loves to keep her drivers informed of every play made by her beloved Knicks, who haven't won a game in a long time and have begun to lose fans at an appalling rate. The team's troubles only seem to increase when flamboyant Texas tycoon Wild Bill Burgess (Frank Langella) buys them. Unfortunately, though he means well, Burgess is clueless when it comes to basketball, believing more attractive cheerleaders will be the ultimate successful key. When that flops, he decides to fire the regular coach and replace him with-Eddie. Naturally, the players are less than thrilled. But her spunk, fire, and dogged sincerity gradually wins them over and spurs them on to become champions. Players include John "Spider" Salley. Superstar player Dennis Rodman makes a cameo as do New York celebrities Donald Trump, Ed Koch, and David Letterman.

Edward I. Koch
as Himself (Former New York City mayor)

Walt Frazier
as Himself

Donald Trump
as Himself

Mujibur Rahman
as Himself

Sirajul Islam
as Himself

David Letterman
as Himself (uncredited)

Jonathan Marten
as Eric--Bag No.1

Ethan Edward Marten
as Keith--Bag No.2

Joseph Sinacori
as Joe the Cop

Tara Wood
as Dancer
View All

The next hour or so is filled with the Knicks committing turnovers, until a player tells Eddie they'll keep losing until she takes an interest in their personal lives. Wow!

What saves the film from abomination is the basketball.

It's a fresh, funny, engaging picture that sets up an arresting situation and then follows through on it realistically.

As long as the hoopsters mix it up with the Whoopster, it's fun. A second-string story keeps interrupting, though.

Ms. Goldberg has everything it takes -- terrific lungs, endless wisecracks, that ear-to-ear grin -- to play the New York Knicks fan who is the star of this Cinderella story.

Even cameos from such NYC luminaries as Ed Koch, Rudy Giuliani, Donald Trump, Sirajul & Mujibar, and appearances from NBA legends Walt Frazier, Rodman, the Spurs, Kings, and Pacers can't save this foul dog. And no Billy Barty, to boot.

Eddie is improbable and stupid...

Even with many fouls, Whoopi's film still is entertaining.

A blessedly obscure little movie that you won't be finding on Whoopi's career highlights reel.

The basketball stuff is, as expected, well choreographed and shot.

Whoopi Goldberg becomes the coach of the Knicks in this silly and utterly harmless sports comedy. Too bad it just isn't funny.

Whoopi is hilarious, and has got real-life Knicks fans thinking 'Why couldnt this happen in real-life?'

Whoopi Goldberg rocks, and this was surprisingly good to have went so unnoticed...it's all the way live!

Whoopi Goldberg's quite fine performance but a bit hilarious as the coach of her obsessive fan NBA basketball team after winning a contest to join in.

i usually dont care for whoopi, but this flick was aight