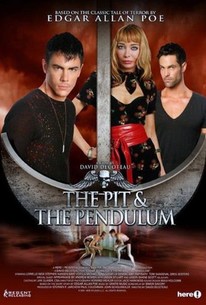 The Pit and the Pendulum Photos

Seven students participating in an experiment designed to eliminate the sensation of pain begin to question the validity of the study after arriving at a remote institute and realizing that their numbers are dwindling fast. Greeted at the institute by eccentric scientist JB Divay, the students view their host's fascination with hypnosis, clocks, and cactuses as simple personality quirks. Before long, however, the frightened lab rats discover that Divay is far from the harmless crackpot she first appeared to be. Later, when one of the students finds his boyfriend strapped to a table beneath a giant pendulum, he must race to prevent Divay from finishing her final experiment.

Greg Sestero
as The Ex

Amy Paffrath
as Gemma
View All

Critic Reviews for The Pit and the Pendulum

There are no critic reviews yet for The Pit and the Pendulum. Keep checking Rotten Tomatoes for updates!

Audience Reviews for The Pit and the Pendulum

Actually worse then the redo of the House of Usher.

The Pit and the Pendulum Quotes