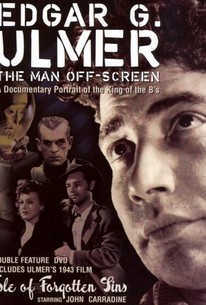 The accomplished documentary editor Michael Palm (I Am From Nowhere, Calling Hedy Lamarr) takes his directorial bow with the nonfiction film Edgar G. Ulmer: The Man Off-Screen. Filmmaker Ulmer raised low-budget, B-picture production to the level of an art form, via careful aesthetic choices and an intelligent hand, producing such time-tested, sensationalistic 'cult classics' as Bluebeard, Detour, The Black Cat and Murder is My Beat. Yet he had, by all accounts, a relatively shadowy and well-hidden private life - so well-hidden that few have attempted to undertake a feature-length cinematic investigation of the helmer's world. Via film clips, rare audio recordings, music cuts, interviews, and recollections from such recent Ulmer protégés as John Landis, Joe Dante, Roger Corman and Wim Wenders, Palm reconstructs piece by piece of the Ulmer story. Throughout, Palm and his participants wields the facts of Ulmer's life that later became legends, from his rise to prominence at the UFA studios in pre-Reich Berlin, to his period of impoverishment in Tinseltown, to his temporary industry banishment for absconding with a studio exec's daughter-in-law.

This 77-minute primer sheds partial light on this B-movie legend who, unlike his contemporaries like Lang, never managed to ascend to the A-list.

Despite some excellent talking heads, Palm's good-natured attempt to stuff Ulmer's life into a B-movie mold of its own ultimately lacks the lean crackerjack narrative stylization that marked the emigre helmer's best works.

[A] well-wrought investigation of the often mysterious life of Edgar G. Ulmer.

One would still do better to turn to the films themselves.

The documentary employs many of Ulmer's trademark techniques, such as rear-projection, and tries to open up the usual talking-head format by taking the camera outside, in and around Hollywood.

The subject and the film clips are great, although the documentary as a whole is a bit gimmicky.

There are no featured audience reviews yet. Click the link below to see what others say about Edgar G. Ulmer: The Man Off-Screen!