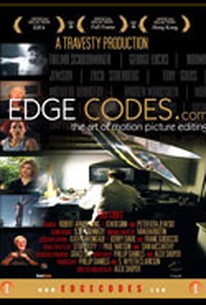 While most casual filmgoers take little note of the editing in a movie, committed fans and filmmakers know that it's the editor who determines the pace and rhythm of a motion picture and that skillful cutting can change the flow of the story, even out inconsistencies in the mood and feel of a picture, and adjust the narrative focus. Editing is more than just assembling shots in a certain order, it's an art form, and this documentary celebrates the craft and how it has grown and evolved through the history of the cinema. Edge Codes.com: The Art of Motion Picture Editing traces this story from the world of pioneering silent auteurs such as Georges Méliès and D.W. Griffith through the bold stylings of the masters of the French New Wave to the technical and creative innovations of films like The Matrix, Memento, and The Sixth Sense. Edge Codes.com includes interviews with noted directors George Lucas and Norman Jewison, as well as top editors Thelma Schoonmaker, Zach Staenberg, Dody Dorn, Andrew Mondshein, and many more.

Alex Shuper's wonderfully informative (if oddly titled) documentary examines editing, a central component of cinema that is often neglected or taken for granted.

Edge Codes ends on a note of speculative futurism, looking ahead to artistic avenues yet unexplored.

This entertaining documentary on the history of film editing curiously leaves out many sterling examples of the craft.

There are no featured reviews for Edge Codes: The Art of Motion Picture Editing at this time.