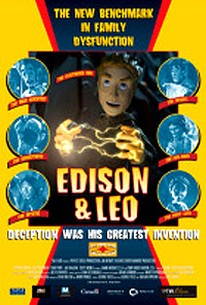 Claymation isn't just for the kiddies anymore as evidenced in this gothic, adult-oriented fairy tale based on an original story by Guy Maddin's long-time screenwriting partner George Tole and featuring the voices of Powers Boohte, Gregory Smith, and Carly Pope. George T. Edison (Boothe) is an oddball inventor who hears with his teeth instead of his ears as a result of a bizarre childhood train accident. By day he toils away in his cluttered laboratory, and by night he listens to phonograph records by chewing on the giant metal horn that conducts the sound. George is sure that his latest invention is the one that will cement him as a true genius. Eager to get the ball rolling, George hastily recruits his son Leo (Smith) to assist in his latest experiment without considering the consequences. As the experiment gets underway, however, something goes horribly awry and Leo is electrified. Now Leo is unable to touch another human without fear of delivering a deadly jolt, a development that leaves him quite lonely until the lovely Zella (Pope) zaps into his life. Zella is the first person with the power to see past Leo's electrified façade, and as such she may just be his ticket to true happiness.

Critic Reviews for Edison and Leo

There are no critic reviews yet for Edison and Leo. Keep checking Rotten Tomatoes for updates!

Audience Reviews for Edison and Leo

There are no featured audience reviews yet. Click the link below to see what others say about Edison and Leo!