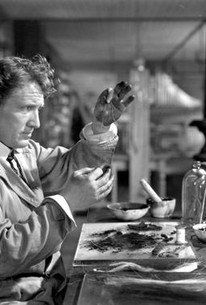 In 1940, MGM turned out two films on the life of Thomas Alva Edison.The first, Young Tom Edison, starred Mickey Rooney and trotted out all the old Edison folklore, including the now-discredited incident in which Tom loses his hearing by being yanked onto a train by his ears. Edison the Man, starring Spencer Tracy in the title role, downplays certain inconvenient facts (including Edison's strong-arm tactics to protect his patents), but adheres more closely to actual events than its predecessor. The story concentrates on Edison's most productive years, from 1872 to 1882 (surprisingly ignoring his role in the development of the motion picture!) The inventions invented herein include the ticker-tape machine, the phonograph, the Dictaphone, and of course the electric light. Gene Lockhart is on hand to once more perform his movie specialty of the blinkered financier who can see no future in Edison's crazy schemes. The film tries to stir up suspense by giving Edison only six months to complete his dream of illuminating the streets of New York, lest he lose the contract--and, by extension, his credibility. While Young Tom Edison had unexpectedly lost money, Edison the Man was a success; as for Spencer Tracy, he was a versatile enough actor to escape the fate of poor Don Ameche, who was forever and inextricably associated with his portrayal of Alexander Graham Bell.

Walter Fenner
as Man at Banquet

Critic Reviews for Edison, the Man

Something of a whitewash job, it never begins to suggest the stubborn and sometimes shortsighted side to the inventor's character that led him, for example, first to fail to recognise the potential of his invention of the movie camera and projector.

Grade A MGM biography with strong Tracy as Thomas Edison.

Audience Reviews for Edison, the Man

There are no featured audience reviews yet. Click the link below to see what others say about Edison, the Man!