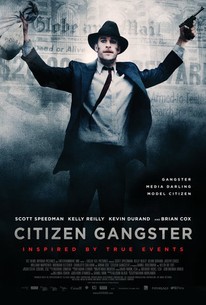 The first feature from writer/director Nathan Morlando, Citizen Gangster is based on the true story of Edwin Boyd (Scott Speedman), the man who became postwar Toronto's most famous criminal. Edwin Boyd has returned from WWII and is dismayed by public indifference towards veterans and humiliated by his inability to fulfill his dream of being a Hollywood star or provide for his children and wife Doreen (Kelly Reilly). Seeing only disappointment in the face of his policeman father (Brian Cox), Eddie is desperate and starts to rob banks. But what starts as friendly and flirtatious robberies, performed while wearing thick makeup, evolves over time into a career that when mixed with a gang of small time criminals is not unlike that of Clyde Barrow or Butch Cassidy, in which crime and love are mixed to get explosive results. -- (C) IFC

Critics Consensus: The Pirates! Band of Misfits Is Certified Fresh

Inspired by Boyd's story, rather than literally retelling it, the movie is less a gangster film than an existential allegory of choices and limitations.

Morlando has crafted a stylishly shot and evocatively designed period piece. But it's the dashing, quietly charismatic Speedman who proves the main draw, holding our attention even when the movie doesn't.

Morlando has chosen to approach this material not with witty cynicism, but with quiet, and at times leaden, sincerity.

A good-looking but passionless affair that remains stubbornly aloof from its audience.

Citizen Gangster hits its marks when it's exploding the character's larger-than-life status, aided in large part by Speedman's career-best turn.

As good as Citizen Gangster is, it would be even better if you could understand the dialogue.

Although a period piece, Citizen Gangster's potshots at the banks ... its concern with the fate of war veterans, its unsympathetic attitude toward authority, all this speaks to the present-day and present realities in Canada.

Speedman continues to grow as an actor.

"Citizen Gangster" is not exactly riveting. Speedman does the best he can in the title role. He gives his character life even as the sub par script drags us along.

The true moments of tension and danger in this film sing, and some moments, big and small, will haunt the viewer.

With no firm hand guiding the proceedings, this potentially interesting slice of Canadian history winds up feeling like just another "Crime Doesn't Pay" PS

How could the tale of Toronto's most flamboyant bank robber be turned into such a blah, seen-it-all-before film?

In "Citizen Gangster," Edwin Boyd(Scott Speedman) is a World War II veteran who works as a bus driver in Toronto. Dreaming of becoming an actor, he walks off the job one day. Now without the means to support his wife Doreen(Kelly Reilly) and two children, they must now rely on the generosity of his father(Brian Cox). At least, until Edwin decides to put some of his theatrical greasepaint and service revolver to use by robbing banks. "Citizen Gangster" is a prime example of a movie not being able to see the forest for the trees, as it is lovingly filmed in muted terms and contains a great deal of period detail. And then almost makes you wonder what the big deal is with this true life story whose biggest surprise is delivered in the postscript.(Saying "you had to have been there" does not count.) Plus, Scott Speedman does nobody any favors in the lead, as he is often overshadowed by the supporting cast, as this movie like many others in the past 20 years simply does not have enough Brian Cox to go around. At least, the story does have a valuable message to deliver, namely find a job you love. Just don't strand any passengers by the side of the road while you do.

Biodramas..love them! This was good. The movie is less about the facts, and more about the impact it had on the lives of those involved. While there is some violence in the movie, it is seriously downplayed for the benefit of making it more of a drama, than a shoot-em-up gangster movie. The outcome is surprising, and moving....

Citizen Gangster is the exciting true story of Edwin Boyd, Canada's greatest bank robber. Boyd was the John Dillinger of Canada, and he robbed several banks in Toronto. Edwin Boyd returned from active duty after WWII and after a string of bad luck, started robbing banks to support his family. Nathan Morlano directs his feature with Citizen Gangster and it is an engaging and thrilling movie that showcases Scott Speedman's talents. Speedman has acted in decent films in the past, but as Edwin Boyd, he delivers the greatest performance of his career thus far. Boyd's criminal career became Canadian folklore, and with this film we get to see this career criminal start out, almost like Dillinger did, from a small time robber, to a full time career criminal with a gang that would terrorize Toronto. I thoroughly enjoyed this film, and if you love a good crime drama, then pick this one up. This is a terrific picture from first director Morlano and he covers Boyd's beginnings to his arrest, imprisonment, escape and other criminal exploits. As a Canadian, I wasn't aware of this interesting bit of history, and this movie definitely opened my eyes, and makes me want to know more about Edwin Boyd and his exploits. Although not perfect, Citizen Gangster is a well made picture that relies on great acting and a compelling true story to make for a worthwhile viewing. This is one of the best Canadian films that I have seen in quite some time, and though not on par with Dillinger, Public Enemies and Bonnie and Clyde, this picture still follows the great crime films that told the real life stories of legendary bank robbers. Citizen Gangster is not an action movie, but it still has plenty of human drama to make this one worth seeing. Scott Speedman made a wise choice to not accept a part in Underworld: Awakening to star in this movie and he really hones his craft as an actor. Citizen Gangster will surely appeal to cinema buffs that enjoy a good crime film to watch, and with Edwin Boyd's exploits expanded from Toronto all the way to Montreal, and he definitely was Canada's very own John Dillinger. Director Nathan Morlano has crafted a fine picture that is engaging from start to finish.

A thrilling and dazzling triumph. An excellent and outstanding movie. An absorbing and invigorating feature that keeps you compelled and drawn to it all the way through. A slick, first-rate and epic crime-drama that forms itself as one of the fin est biopics ever made. One of the best Canadain films I have ever seen. A tremendosuly entertaining and enjoyable movie. A wonderfully shot, very tense and powerful gangster saga of this real-life character. Scott Speedman gives his best-career performance yet, he shines with charisma, power and heart. A great movie star performance that deserves awards attention. A load of great performances from its wonderful cast. Brain Cox is brilliant as always. Kelly Reilly is outstanding. Kevin Durand is terrific. Director, Nathan Morlano crafts fine, remarkable and truly amazing movie. Morlano proves to have the good to be one of the finest and promosing new directors. It would be a crime to miss this film. It knows how to thrill, it knows how to chill and it knows how to be fun. A total blast with great characters that are too great to ignore.